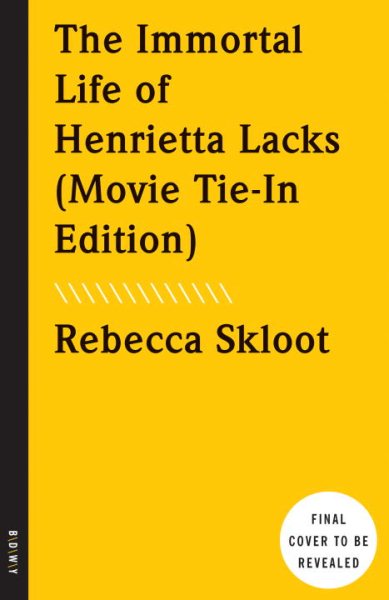 Documents the story of how scientists took cells from an unsuspecting descendant of freed slaves and created a human cell line that has been kept alive indefinitely, enabling discoveries in such areas as cancer research, in vitro fertilization, and gene mapping, in a book that inspired the forthcoming HBO film starring Oprah Winfrey. Reissue. Movie tie-in. Read More
#1 NEW YORK TIMES BESTSELLER &; &;The story of modern medicine and bioethics&;and, indeed, race relations&;is refracted beautifully, and movingly.&;&;Entertainment WeeklyNOW A MAJOR MOTION PICTURE FROM HBO® STARRING OPRAH WINFREY AND ROSE BYRNE &; ONE OF THE &;MOST INFLUENTIAL&; (CNN), &;DEFINING&; (LITHUB), AND &;BEST&; (THE PHILADELPHIA INQUIRER) BOOKS OF THE DECADE &; WINNER OF THE CHICAGO TRIBUNE HEARTLAND PRIZE FOR NONFICTION NAMED ONE OF THE BEST BOOKS OF THE YEAR BY The New York Times Book Review &; Entertainment Weekly &; O: The Oprah Magazine &; NPR &; Financial Times &; New York &; Independent (U.K.) &; Times (U.K.) &; Publishers Weekly &; Library Journal &; Kirkus Reviews &; Booklist &; Globe and MailHer name was Henrietta Lacks, but scientists know her as HeLa. She was a poor Southern tobacco farmer who worked the same land as her slave ancestors, yet her cells&;taken without her knowledge&;became one of the most important tools in medicine: The first &;immortal&; human cells grown in culture, which are still alive today, though she has been dead for more than sixty years. HeLa cells were vital for developing the polio vaccine; uncovered secrets of cancer, viruses, and the atom bomb&;s effects; helped lead to important advances like in vitro fertilization, cloning, and gene mapping; and have been bought and sold by the billions. Yet Henrietta Lacks remains virtually unknown, buried in an unmarked grave.Henrietta&;s family did not learn of her &;immortality&; until more than twenty years after her death, when scientists investigating HeLa began using her husband and children in research without informed consent. And though the cells had launched a multimillion-dollar industry that sells human biological materials, her family never saw any of the profits. As Rebecca Skloot so brilliantly shows, the story of the Lacks family&;past and present&;is inextricably connected to the dark history of experimentation on African Americans, the birth of bioethics, and the legal battles over whether we control the stuff we are made of. Over the decade it took to uncover this story, Rebecca became enmeshed in the lives of the Lacks family&;especially Henrietta&;s daughter Deborah. Deborah was consumed with questions: Had scientists cloned her mother? Had they killed her to harvest her cells? And if her mother was so important to medicine, why couldn&;t her children afford health insurance? Intimate in feeling, astonishing in scope, and impossible to put down, The Immortal Life of Henrietta Lacks captures the beauty and drama of scientific discovery, as well as its human consequences. Read Less

The Immortal Life of Henrietta Lacks

The Immortal Life of Henrietta Lacks