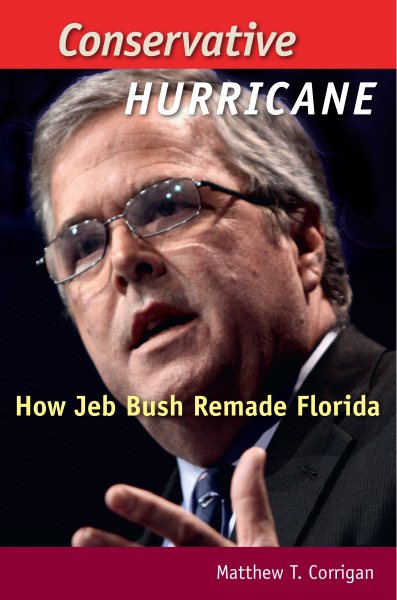 Assesses Jeb Bush's social and economic policies as well as his consolidation of executive authority to consider how he transformed Florida during his two terms as the Republican governor of a traditionally Democrat-voting state. Read More
“A timely reminder that Jeb Bush was and remains a deep-dyed conservative who was not reluctant to magnify and use all the powers of his office.”—Martin A. Dyckman, author of Reubin O’D. Askew and the Golden Age of Florida Politics   “A detailed look at how Jeb Bush used enhanced constitutional executive powers, the first unified Republican state government elected to Tallahassee, and the force of his own personality and intellect to enact significant conservative political and policy changes in Florida.”—Aubrey Jewett, coauthor of Politics in Florida             Few governors in modern history have altered the balance of power in their states as fundamentally as Jeb Bush did in Florida. Both hailed and reviled as the most consequential governor to be sworn into office in Tallahassee, Bush radically—and perhaps permanently—changed the dynamics of Florida politics. The first two-term Republican governor of a historically Democrat-voting state, Bush broadened the reach and bolstered the influence of the executive branch while drastically diminishing the roles of the legislature and the judiciary. During his second inaugural address, the small-government conservative dreamed of an idyllic Tallahassee free of government employees while presiding over the largest accumulation of gubernatorial authority in the state’s history. It was the beginning of a new kind of conservative activism, one that only gained strength in the years after Bush left office and which has now spread across the country. Republican governors around the nation have lauded him as a trailblazer, and his path has become the roadmap to their victories, his rhetoric the talking points of nearly every election cycle since. In Conservative Hurricane, Matthew Corrigan delves into the maelstrom of Florida politics where Bush rose to power to become an unstoppable force in state and national politics.  Corrigan traces Bush’s political trajectory from an ambitious but failed first campaign to his eventual consolidation of executive authority. Fair and honest in his analysis, Corrigan probes beyond the mild veneer, the sound bites, and the photo ops to examine the real evidence of Bush’s political leanings: his policies, politics, and legacy in the Sunshine State. Assessing a multitude of the governor’s social and economic policies and the indelible mark they have left on the state, Corrigan highlights Bush’s approach to business recruitment; his response to the culture wars; his stance on gun rights, end-of-life issues, and immigration; and his sweeping, all-encompassing, education reforms—all of which have become touchstones and controversies for Republican leaders elsewhere. Corrigan concludes that the most effective challenge to the opinion of national observers who label Bush a moderate is his own record. Ultimately, anyone who opposes—or desires—a Jeb Bush presidency need only glimpse at Florida to understand what that might look like. Read Less

Those Days at Nettuno January 22-May 26

The Family in a Transforming Society