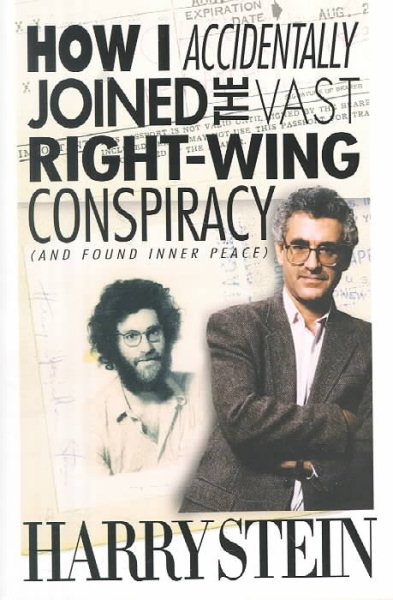 In a political memoir, the author recalls how he made the journey from 1970s liberal to 1990s conservative. Read More
Bestselling author and renowned ethics columnist Harry Stein didn't start out conservative. But somewhere along the way, real life--and fatherhood--gave him pause. In this passionate and provocative memoir, Stein recounts his personal journey from `70's liberal to `90's conservative--a journey that began with a few troubling questions he couldn't even share with his friends. Now the truth is out--in this daring, brilliantly argued, often savagely funny work that is bound to resonate with many who have witnessed the social revolution of the past thirty years and questioned even some of its outcome. Even secretly.Harry Stein's left-liberal credentials were spotless. As a journalist in an industry populated by liberals, he carried the left-wing banner in his life and work. The transformation of Harry Stein began when he became a father. And nothing in his wildest dreams could have prepared him for what was to come....First of all, the Right was beginning to sound right. Even worse, the Left was beginning to sound--and look--wrong. In a memoir both personal and political, Stein cuts through the distortions on both sides and shows how liberating it is to no longer have to pass as a correct thinker. Speaking to his peers and to his times, Stein fearlessly tackles such provocative topics as feminism, affirmative action, PC education, media, gay rights, and sexual McCarthyism. He tells what he really thinks of...sex, lies, and Bill Clinton...how his columns on Murphy Brown and day care were his personal "coming out"...the daily corruption of network news and big-time front pages...what has happened to a once-great newspaper, The New York Times.For those who dare to entertain questions--even privately--Stein offers a few tests: Choose the most biased network anchor (Pop Quiz, page 110). Learn who would have been most likely to give up his seat on a Titanic lifeboat...(see page 47). How far have academic standards fallen since the nineteenth century? Take the test on page 233. Could you pass today?Here are portraits in political courage--and cowardice. Unforgettable anecdotes about newsmakers Stein has known. It's all here and more in the witty, trenchant observations--and candid confessions--of a former liberal bound to incite, entertain, and maybe even change a few minds along the way. How to tell if you've joined the vast right-wing conspiracy: You hear someone talking about "morality" and you no longer instantly assume he must be a sexually repressed religious nut. You're actually relieved that your daughter plays with dolls and your son plays with guns. You sit all the way through Dead Man Walking and at the end still want the guy to be executed. Christmas season rolls around and it hits you there may be a religious connection. At your kids' back-to-school night, you are shocked to discover the only dead white male on your tenth-grader's reading list is Oscar Wilde. And by the end of the night you realize the only teacher who shares your values teaches phys ed. Much as you'd like to, you can't get yourself to believe that screwing around on one's wife is an addiction. Read Less

The Girl Watchers Club: Lessons from the Battlefields of Lif...