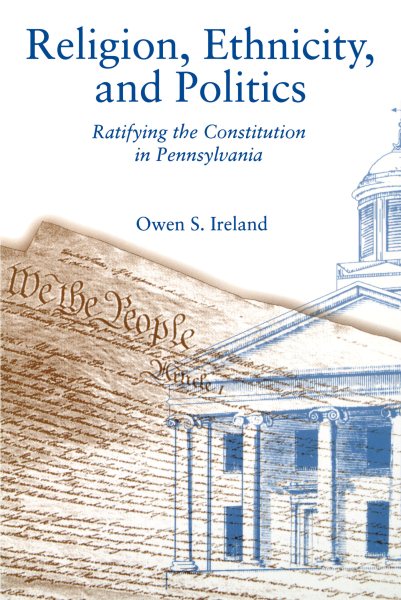 In September 1787 the Constitutional Convention in Philadelphia proposed a new Federal Constituti... Read More
In September 1787 the Constitutional Convention in Philadelphia proposed a new Federal Constitution to replace the beleaguered Articles of Confederation. Each state then had to call a convention of its own to vote on ratification. Pennsylvania, like many states, was deeply divided over the new constitution. For six months Federalists and Antifederalists fought a bitter and, on occasion, violent political battle, with the Federalists ultimately prevailing.In this detailed study of Pennsylvania, the first in fifty years, Owen S. Ireland argues that the overwhelming majority of voters in Pennsylvania favored ratification. While many modern views of the ratification conflict in America explain the Federalist success as a victory of the "patrician" minority over the "plebeian" majority, Ireland finds that political divisions were based less on class, sectional, and occupational differences than on partisan attachments rooted in religious and ethnic conflicts. The state Constitutionalist party, dominated by Presbyterians, opposed ratification, while the Anglican-led Republicans supported it. Voters from Scots-Irish and German Reformed backgrounds joined the Antifederalists, and those from virtually every other ethnic and religious group supported the Federalists.Ireland has long concentrated his scholarly work on assembling and analyzing quantitative data on politics and politicians in late eighteenth-century Pennsylvania. Here he uses the results of this research as the foundation on which to build a narrative of one of the most dramatic and significant events of the Revolutionary era. Read Less

Goodreads reviews for Religion, Ethnicity, and Politics: Ratifying the Constitution in Pennsylvania

Tooth and Nail: A Novel Approach to the New SAT