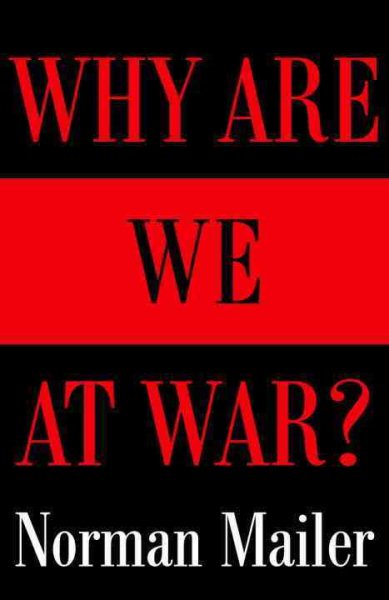 Argues that the origins of the war in Iraq lie more in the ambitions of President Bush than in fear of terrorism or distaste for the Iraqi government's human rights record, and suggests that the war will adversely affect America. Read More
Beginning with his debut masterpiece, The Naked and the Dead, Norman Mailer has repeatedly told the truth about war. Why Are We at War? returns Mailer to the gravity of the battlefield and the grand hubris of the politicians who send soldiers there to die. First published in the early days of the Iraq War, Why Are We at War? is an explosive argument about the American quest for empire that still carries weight today. Scrutinizing the Bush administration’s words and actions, Mailer unleashes his trademark moral rigor: “Because democracy is noble, it is always endangered. . . . To assume blithely that we can export democracy into any country we choose can serve paradoxically to encourage more fascism at home and abroad.” Praise for Why Are We at War? “We’re overloaded with information these days, some of it possibly true. Mailer offers a provocative—and persuasive—cultural and intellectual frame.”—Newsweek “[Mailer] still has the stamina to churn out hard-hitting criticism.”—Los Angeles Times “Penetrating . . . There’s plenty of irreverent wit and fresh thinking on display.”—San Francisco Chronicle “Eloquent . . . thoughtful . . . Why Are We at War? pulls no punches.”—Fort Worth Star-Telegram Praise for Norman Mailer “[Norman Mailer] loomed over American letters longer and larger than any other writer of his generation.”—The New York Times “A writer of the greatest and most reckless talent.”—The New Yorker “Mailer is indispensable, an American treasure.”—The Washington Post “A devastatingly alive and original creative mind.”—Life “Mailer is fierce, courageous, and reckless and nearly everything he writes has sections of headlong brilliance.”—The New York Review of Books “The largest mind and imagination [in modern] American literature . . . Unlike just about every American writer since Henry James, Mailer has managed to grow and become richer in wisdom with each new book.”—Chicago Tribune “Mailer is a master of his craft. His language carries you through the story like a leaf on a stream.”—The Cincinnati Post Read Less

Goodreads reviews for Why Are We at War?