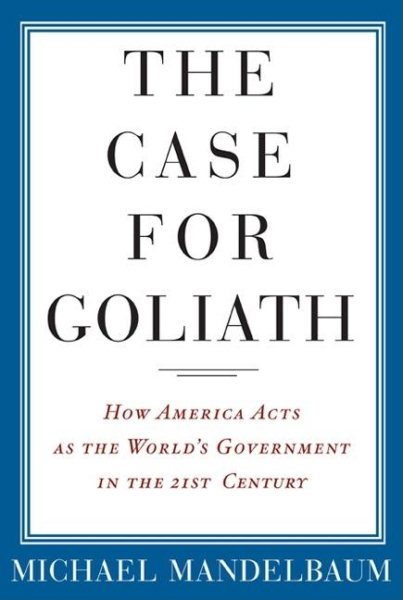 One of the nation's leading foreign policy thinkers provides an eye-opening look at America's new role in the world, the responsibilities it has undertaken, and the challenges it faces. Read More
Many have called America an empire, and many have also criticized the ostensibly "imperial" way in which the nation uses its power. But in The Case for Goliath, Michael Mandelbaum, one of America's leading foreign policy thinkers, takes this thinking to task. He explains that the United States uses its enormous power not as an empire but to provide the world with the services of a government. The role it plays, he shows, is, on balance, positive, and is performed with the tacit consent of many of the nation's critics. And this has all come to pass even though neither the United States nor any other country sought to make it happen.Mandelbaum describes the contributions that American power makes to global security, while also noting that the most important of these contributions are the least controversial and receive the least attention. He identifies the many American contributions to global prosperity, as well as the dangers to the health of the international economy posed by U. S. energy policies and the worldwide role of the dollar. And he shows how the foreign policy innovations of the Clinton and Bush administrations, which are usually thought to be polar opposites, in fact closely resemble each other.The Case for Goliath analyzes the ways in which other countries have come to accept, resent, and exert influence on America's global role, and it assesses the uncertain prospects for sharing the burden of global governance more widely, through a multilateral approach to international security and the management of the global economy. Read Less

Goodreads reviews for The Case for Goliath: How America Acts as the World's Government in the Twenty-First Century