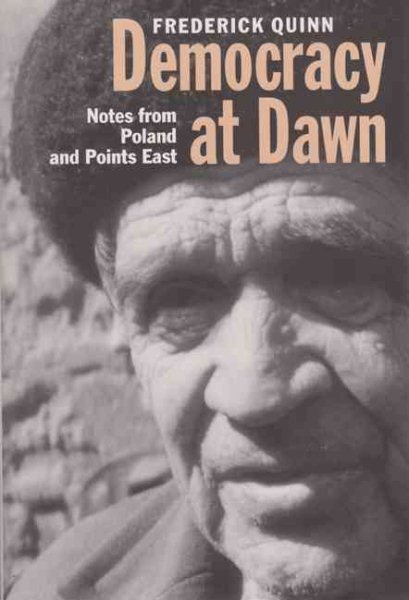 From the sweeping changes of democratic reform to the bloody conflict of the Chechen Republic,... Read More
From the sweeping changes of democratic reform to the bloody conflict of the Chechen Republic, 1993-95 was a tumultuous and critical time for Eastern Europe and the former Soviet republics. During that two-year period, Frederick Quinn toured the former Soviet empire as head of the rule of law programs of the Warsaw Office of Democratic Institutions and Human Rights (ODIHR). His primary task was to help the new nations of the region write new constitutions and rebuild their judicial systems. Keenly aware of the uniqueness of the history he was witnessing unfold, Quinn took notes of his experiences. The result is Democracy at Dawn—a personal, firsthand account of hope and nascent political and social freedom in a drab, confused, confusing, and often seemingly hopeless part of the world. Quinn recounts the difficulties of many of the countries, as governmental and judicial habits and thought patterns held over from communist regimes, lack of equipment and supplies, shortages of food and services, and, in the case of the Chechen Republic, a devastating civil war all conspire against the formation of popular, pluralistic democracies. He also cites frustrating bureaucratic problems, both with the various host governments as well as with the administration of ODIHR. Quinn also recalls in fascinating detail his encounters with the new leaders of the region, such as Georgia's Edouard ... and ... Vaclav Havel. At the core of this powerful memoir is Quinn's admiration for the many people he encountered, from working men and women to the functionaries at the highest levels of government, who share a desire for democracy and constitutionality—alien concepts that they nevertheless desperately want to realize. And, despite daunting obstacles faced by the former communist-bloc countries, Quinn asserts that the case for democracy may be more hopeful than it might at first appear. Public discussion about new forms of government is widespread; intense media scrutiny has helped keep the ambitions of authoritarian leaders in check; nongovernmental civic organizations are growing; and the international community has taken increased interest in holding the new states to treaty commitments involving human rights, free elections, and the creation of independent judiciaries. Engaging and informative reading for the general reader interested in the new Eastern Europe, Democracy at Dawn also offers sociologists, historians, and political scientists a valuable inside look at the rise of democracy in Eastern Europe after the fall of the Iron Curtain. It will be of interest as well to judicial scholars concerned with the development of constitutional judicial systems in new democracies. Read Less

The Sum of All Heresies: The Image of Islam in Western Thoug...

American Indian Myths and Legends (The Pantheon Fairy Tale a...

Birds: Their Life, Their Ways, Their World