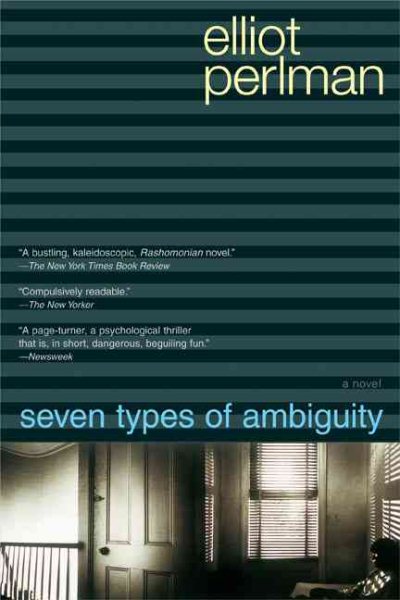 Frustrated by years of unrequited love, an unemployed school teacher takes matters into his own hands, with unexpected repercussions, in a story told by six different narrators whose lives have become entangled with one another. Read More
Seven Types of Ambiguity is a psychological thriller and a literary adventure of breathtaking scope. Celebrated as a novelist in the tradition of Jonathan Franzen and Philip Roth, Elliot Perlman writes of impulse and paralysis, empty marriages, lovers, gambling, and the stock market; of adult children and their parents; of poetry and prostitution, psychiatry and the law. Comic, poetic, and full of satiric insight, Seven Types of Ambiguity is, above all, a deeply romantic novel that speaks with unforgettable force about the redemptive power of love.The story is told in seven parts, by six different narrators, whose lives are entangled in unexpected ways. Following years of unrequited love, an out-of-work schoolteacher decides to take matters into his own hands, triggering a chain of events that neither he nor his psychiatrist could have anticipated. Brimming with emotional, intellectual, and moral dilemmas, this novel-reminiscent of the richest fiction of the nineteenth century in its labyrinthine complexity-unfolds at a rapid-fire pace to reveal the full extent to which these people have been affected by one another and by the insecure and uncertain times in which they live. Our times, now. Read Less