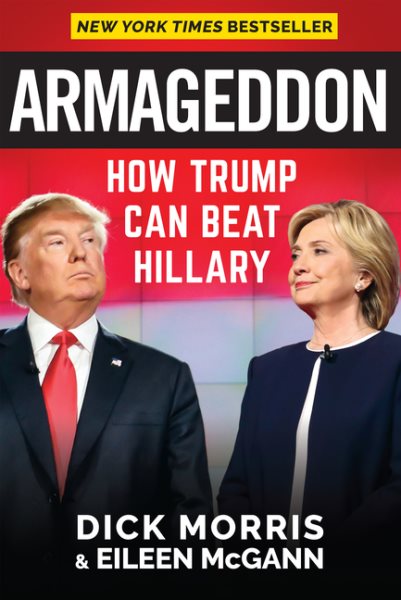 Provides a strategy for the Republicans to win back the White House in the 2016 election and defeat candidate Hillary Clinton over such issues as terrorism, immigration, and class warfare. Read More
New York Times BestsellerAT STAKE: THE FUTURE OF AMERICAThe 2016 election is truly America's Armageddon&#151;the ultimate and decisive battle to save America, a fight to defeat Hillary Clinton and the forces seeking to flout our constitutional government and replace it with an all-powerful president backed up by an activist judiciary that answers to no one. Already President Obama has moved America far down this path, and a President Clinton will act as his "third term," institutionalizing the excesses of the past eight years. In Armageddon, bestselling author and political strategist Dick Morris provides a winning game plan to take back the White House, and America. Because this is our last chance:&#149; Our last chance to stop socialist uniformity, corruption and executive usurpation&#149; Our last chance to curb welfare programs that are destroying the economic and social fabric of the nation&#149; Our last chance to secure our border and keep our sovereignty&#149; Our last chance to stand up against ISIS and terrorism&#149; Our last chance to protect the Second AmendmentWe can do it. We must. It's our last chance. Read Armageddon, or risk losing the battle to save America!On Tuesday, November 8, 2016, American voters will make a momentous decision.They will decide whether or not this great country will remain a free market, constitutional democracy. The stakes could not be higher.If Hillary Clinton is elected president, it will mean the end of the America we know and love.Armageddon, by New York Times bestselling authors Dick Morris and Eileen McGann, is a call to arms, a call to join that ultimate battle.Few know Hillary Clinton better than Dick Morris. For almost two decades he served as a special adviser to both her and her husband, Bill Clinton. He knows their strengths, their vulnerabilities, and even their deepest secrets.In Armageddon, Morris offers a manual on how to win this battle and defeat Hillary once and for all. He argues that a typical Republican campaign won’t work&#151;and that Hillary’s opponent must strike her in a very unorthodox and powerful way.Morris says it’s a winning strategy and voters play a critical role.A noted political strategist, Dick Morris has created winning strategies for numerous presidential campaigns in the U.S. and abroad. In this book he lays out a war plan, one the Republican nominee must use to prevent her victory:&#149; Throw a surprising right jab: terrorism and healthcare&#149; Throw the left hook: jobs, immigration, Wall Street&#149; Play her game on class warfare: women, Latinos, and young votersRepublicans need to stop playing by the old rules of the game. Those rules don’t work&#151;they elected Barack Obama twice. Obama has changed America in fundamental ways and Morris posits that Hillary’s opponents need to grasp this and implement a strategy that can finally defeat her. Read Less

Goodreads reviews for Armageddon: How Trump Can Beat Hillary