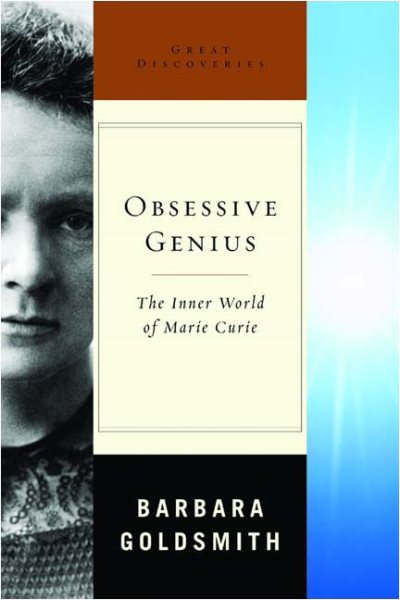 Draws on diaries, letters, and family interviews to discuss the lesser-known achievements and scientific insights of the Nobel Prize-winning scientist, documenting how she was compromised by the prejudices of a male-dominated society. Read More
The myth of Marie Curie - the penniless Polish immigrant who through genius and obsessive persistence endured years of toil and deprivation to produce radium, a luminous panacea for all the world's ills, including cancer - has obscured the remarkable truth behind her discoveries. Marie Curie's shrewd though controversial insight was that radioactivity was an atomic property that could be used to discover new elements. While her work won her two Noble Prizes and transformed our world, it did not liberate her from the prejudices of either the male-dominated scientific community or society.In Obsessive Genius, the author and historian Barbara Goldsmith has discovered the woman behind the icon we have come to believe in - an all-too-human woman trying to balance a scientific career with the obligations of family, the prejudice of society, the constant search for adequate funding, and the battle for recognition.Using original research (diaries, letters, and family interviews) to peel away the layers of myth, Goldsmith offers a portrait of Marie Curie, her amazing discoveries, and the immense price she paid for fame. Read Less

Other Powers: The Age of Suffrage, Spiritualism, and the Sca...