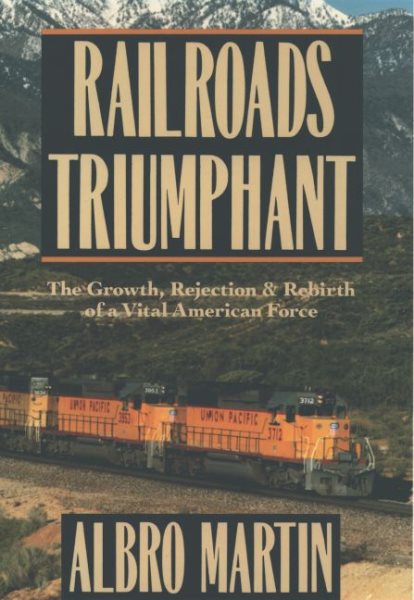 Chronicles the history of the railroads, emphasizes their significance in the development of the United States, and defends their enduring importance to American economic life Read More
In 1789, when the First Congress met in New York City, the members traveled to the capital just as Roman senators two thousand years earlier had journeyed to Rome, by horse, at a pace of some five miles an hour. Indeed, if sea travel had improved dramatically since Caesar's time, overland travel was still so slow, painful, and expensive that most Americans lived all but rooted to the spot, with few people settling more than a hundred miles from the ocean (a mere two percent lived west of the Appalachians). America in effect was just a thin ribbon of land by the sea, and it wasn't until the coming of the steam railroad that our nation would unfurl across the vast inland territory. In Railroads Triumphant, Albro Martin provides a fascinating history of rail transportation in America, moving well beyond the "Romance of the Rails" sort of narrative to give readers a real sense of the railroad's importance to our country. The railroad, Martin argues, was "the most fundamental innovation in American material life." It could go wherever rails could be laid--and so, for the first time, farms, industries, and towns could leave natural waterways behind and locate anywhere. (As Martin points out, the railroads created small-town America just as surely as the automobile created the suburbs.) The railroad was our first major industry, and it made possible or promoted the growth of all other industries, among them coal, steel, flour milling, and commercial farming. It established such major cities as Chicago, and had a lasting impact on urban design. And it worked hand in hand with the telegraph industry to transform communication. Indeed, the railroads were the NASA of the 19th century, attracting the finest minds in finance, engineering, and law. But Martin doesn't merely catalogue the past greatness of the railroad. In closing with the episodes that led first to destructive government regulation, and then to deregulation of the railroads and the ensuing triumphant rebirth of the nation's basic means of moving goods from one place to another, Railroads Triumphant offers an impassioned defense of their enduring importance to American economic life. And it is a book informed by a lifelong love of railroads, brimming with vivid descriptions of classic depots, lavish hotels in Chicago, the great railroad founders, and the famous lines. Thoughtful and colorful by turn, this insightful history illuminates the impact of the railroad on our lives. Read Less

Goodreads reviews for Railroads Triumphant: The Growth, Rejection, and Rebirth of a Vital American Force

Easter Bugs : A Springtime Pop-up by David A Carter

By Carter, David A.