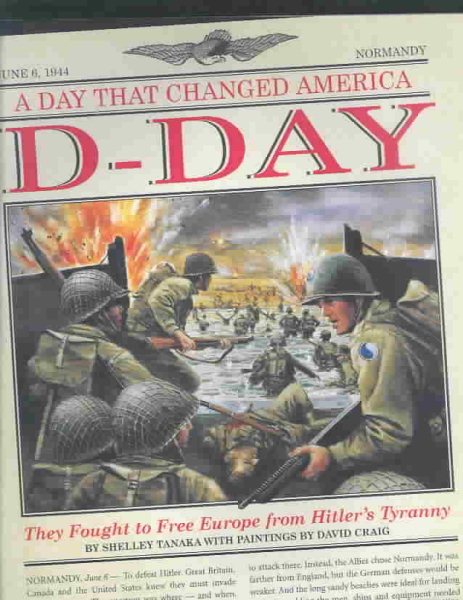 Describes the Allied landing on the beaches of Normandy on June 6, 1944, from the point of view of four soldiers who were there. Read More
It was the greatest invasion the world had ever seen. Officially known as "Operation Overlord," this World War II assault began on the morning of June 6, 1944. Thousands of American, British, and Canadian soldiers aboard hundreds of landing craft attacked beaches along nearly fifty miles of France's coastline in Normandy. Backing them up were the big guns of some of the mightiest ships in the Allied navies, and countless bomber, fighter, and transport aircraft. By the end of that day, an Allied army had made it ashore despite sometimes fierce opposition, signaling the end of Nazi tyranny over Europe. Using the real-life stories of young men caught up in this great event, along with original paintings, photographs, and memorabilia, D-Day, the book, will present a compelling account of this world-changing day. Shelly Tanaka is the author of many acclaimed books of nonfiction for children, including the first two books in The Day That Changed America Series: Gettysburg and The Alamo. She is also the author of Attack on Pearl Harbor and many of the books in the "I Was There" series. Read Less

Goodreads reviews for D-Day: A Day That Changed America: They Fought to Free Europe from Hitler's Tyranny

A Day That Changed America: Gettysburg