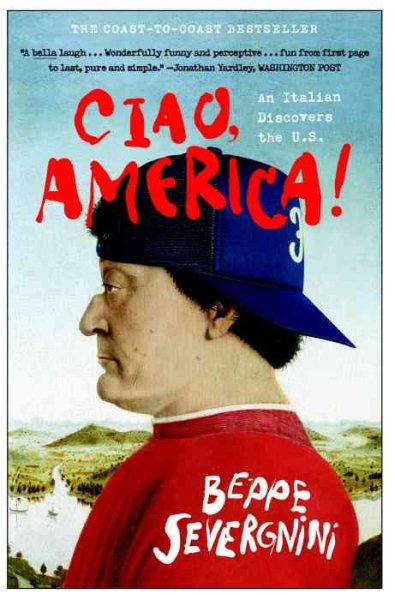 In the wry but affectionate tradition of Bill Bryson, Ciao, America! is a delightful look... Read More
In the wry but affectionate tradition of Bill Bryson, Ciao, America! is a delightful look at America through the eyes of a fiercely funny guest — one of Italy’s favorite authors who spent a year in Washington, D.C.When Beppe Severgnini and his wife rented a creaky house in Georgetown they were determined to see if they could adapt to a full four seasons in a country obsessed with ice cubes, air-conditioning, recliner chairs, and, of all things, after-dinner cappuccinos. From their first encounters with cryptic rental listings to their back-to-Europe yard sale twelve months later, Beppe explores this foreign land with the self-described patience of a mildly inappropriate beachcomber, holding up a mirror to America’s signature manners and mores. Succumbing to his surroundings day by day, he and his wife find themselves developing a taste for Klondike bars and Samuel Adams beer, and even that most peculiar of American institutions -- the pancake house.The realtor who waves a perfect bye-bye, the overzealous mattress salesman who bounces from bed to bed, and the plumber named Marx who deals in illegally powerful showerheads are just a few of the better-than-fiction characters the Severgninis encounter while foraging for clues to the real America. A trip to the computer store proves just as revealing as D.C.’s Fourth of July celebration, as do boisterous waiters angling for tips and no-parking signs crammed with a dozen lines of fine print. By the end of his visit, Severgnini has come to grips with life in these United States -- and written a charming, laugh-out-loud tribute. Read Less

Goodreads reviews for Ciao, America!: An Italian Discovers the U.S.

La Bella Figura: A Field Guide to the Italian Mind

La Bella Figura: A Field Guide to the Italian Mind