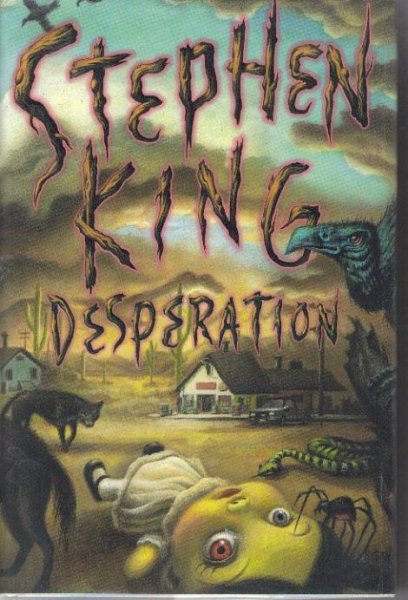 Several cross-country travelers--including a writer, a family on vacation, and a professor and his wife--end up in the little mining town of Desperation, where a crazy policeman and evil forces compel them to fight for their lives Read More
Nevada is mostly a long stretch of desert you cross on the way to somewhere else. And with someone else, if you're lucky...because it's a scary place. Headed down Route 50 in the brutal summer heat are people who are never going to reach their destinations. Like the Jacksons, a professor and his wife going home to New York City; the Carvers, a Wentworth, Ohio, family bound for a vacation at Lake Tahoe; and aging literary lion Johnny Marinville, inventing a gonzo image for himself astride a 700-pound Harley.A dead cat nailed to a road sign heralds the little mining town of Desperation, a town that seems withered in the shade of a man-made mountain known as the China Pit. But it's worse than that, much worse. Regulating the traffic there is Collie Entragian, an outsize uniformed madman who considers himself the only law west of the Pecos. God forbid you should be missing a license plate or find yourself with a flat tire.There's something very wrong here, all right, and Entragian is only the surface of it. The secrets embedded in Desperation's landscape, and the evil that infects the town like some viral hot zone, are both awesome and terrifying. But as young David Carver seems to know - though it scares him nearly to death to realize it - so are the forces summoned to combat them. Read Less