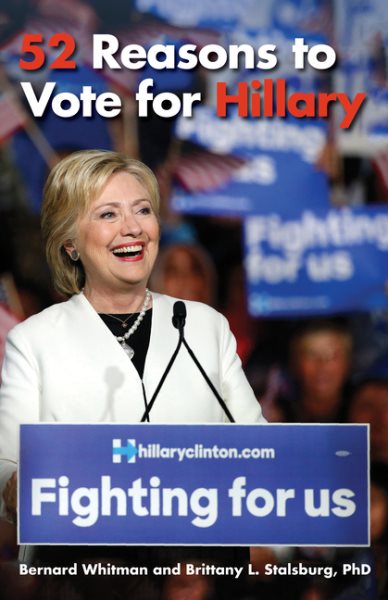 Feeling that many Americans see Hillary Clinton as aloof and inaccessible, the authors, lifelong Democrats and strong Hillary supporters, re-introduce her to the public. A guide to her political viewpoints is presented. Read More
52 Reasons to Vote for Hillary is a comprehensive guide and re-introduction to Hillary Clinton’s career and life history to help voters understand why she is the best candidate to lead America forward into the 21st century.In her years as First Lady, U.S. Senator, and Secretary of State, Hillary has championed the civil liberties and human rights of all Americans while demonstrating a willingness to use both diplomacy and military force on the world stage where and when required, earning her respect from world leaders and Democrats and Republicans alike.Written by Bernard Whitman and Dr. Brittany L. Stalsburg, this informative book illustrates Hillary’s vision for America, contrasts her stances with the Republicans, and provides the most important facts and ideas that drive Hillary’s candidacy to help the American people make an informed decision before casting their presidential vote. Read Less

Goodreads reviews for 52 Reasons to Vote for Hillary