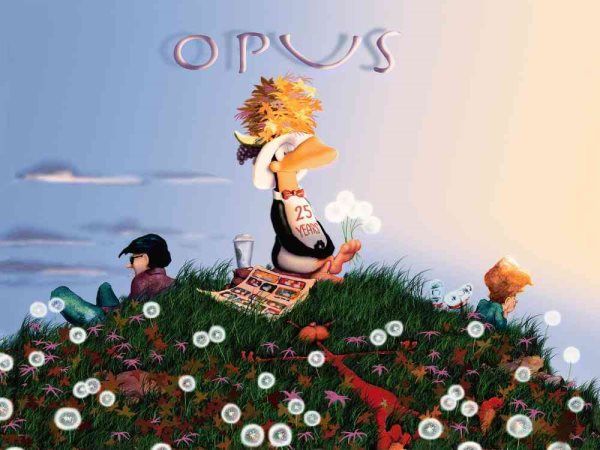 A twenty-fifth anniversary compendium of comics featuring the lovable, maladjusted penguin and his companions Bill the Cat, Steve Dallas, and Portnoy follows their shared adventures. Read More
From one of the funniest minds--and pens--of our time, at last, the definitive collection of the very best of Opus, everyones favorite maladjusted penguin.One of Americas most beloved comic geniuses is back, with this collectible 25th anniversary compendium of the best of Opus, joined by his hilarious supporting cast, including Binkley, Milo, Bill the Cat, Steve Dallas, Ronald Ann, and the rest of the residents of Bloom County and Outland. From Antarctica to Omaha, Opus has cavorted with space creatures, impersonated rock stars, fended off accusations of penguin lust, and even campaigned for office. Now, in addition to the classic strips, Berkeley Breathed also brings us never-before-collected Bloom County cartoons and original all-new material from his Opus comics. Brace yourself for the sidesplitting, table-pounding, milk-through-the-nose-spewing laughter that only Opus and his outlandish friends can generate. The perfect collection for both die-hard fans and those discovering the matchless humor of Berkeley Breathed for the first time. Read Less

Goodreads reviews for OPUS: 25 Years of His Sunday Best

Balalaika: Russia's Most Beautiful Songs by Stars of St. Pet...