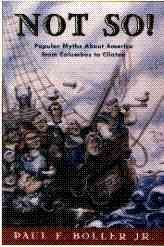 Provides a look at the popular myths and misconceptions of American history, from George Washington's false teeth, to FDR's alleged prior knowledge of Pearl Harbor, to the Kennedy assassination Read More
In sailing westward in 1492, did Columbus defy the prevailing belief that the Earth was flat? Was Thomas Paine an atheist? Was Truman plucked from obscurity to be FDR's running mate in 1944? Are presidential campaigns nowadays far dirtier than they were in the past? Is Hillary Clinton the most active or influential First Lady ever? Not so, says Paul Boller, in this delightfully informative look at some of the most common myths and misconceptions about the American past. As he did in his bestselling They Never Said It, Boller provides us with a cornucopia of historical correction, debunking myths that range from the trivial--for instance, George Washington did not have false teeth made of wood (they were made of ivory)--to the pernicious (FDR did not know in advance that the Japanese planned to bomb Pearl Harbor). We learn that most educated people in Columbus's day knew the world was round (it was Washington Irving who first portrayed Columbus as defying a coterie of flat-earthers); that Washington's famous Farewell Address was mostly written by Alexander Hamilton; that the Pledge of Allegiance was penned by Francis Bellamy, a devout socialist, in 1892 (and it was intended as a paean to big government); that Thomas Paine was not an atheist, but a deist (as were Washington, Jefferson, and Franklin), and his Age of Reason attacked both organized religion and atheism; that Truman was far from an obscure politician in 1944 (he had been on the cover of Time in 1943 for his Senate work uncovering waste and fraud in the war industries, and a Look magazine poll placed Truman among the ten figures who had contributed the most to the war effort); that presidential campaigns in the old days were more vituperative than recent ones; and that several First Ladies were more influential than Hillary Clinton, most notably Eleanor Roosevelt and Edith Wilson (the latter played a crucial role in her husband's administration from 1919 to 1921, after he suffered a massive stroke). Boller doesn't simply debunk each myth, but instead provides us with much fascinating history surrounding each case, so that the reader is treated to intriguing discussions of many singular episodes in American history, including the Kennedy assassination, the McCarthy hearings, the events leading up to Pearl Harbor, and Watergate. And finally, if the book provides many eye-opening surprises and amusing passages, there is also a serious side of Boller's exploration of American myth. As he shows, much misinformation has been cooked up for political or ideological reasons. By debunking these tales, Boller warns us to question what we hear and what we think we know about America and about our leaders, past and present. The chronicles of American history are strewn with legends, fables, folklore, misconceptions, and outright lies. Patriotism has set many a tall tale in motion, but so have political partisanship and ideological zeal. For everyone who loves history--or the truth--Paul Boller has given us a candid and absorbing look at the American past that helps us get a good sense of where we have been and who we are as a people. Read Less

Goodreads reviews for Not So!: Popular Myths About America's Past From Columbus to Clinton