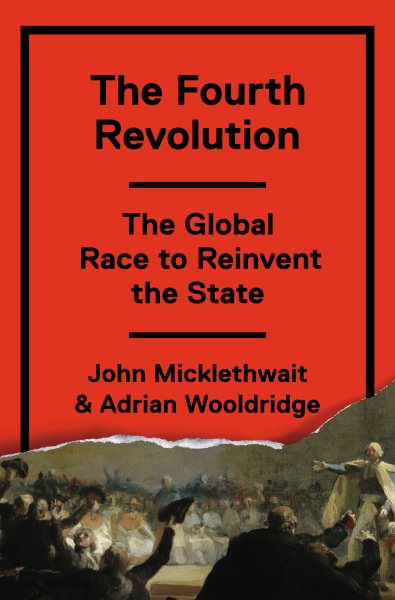 Argues that a current crisis in government represents a fourth radical transition in the history of the nation-state, predicting a shift from large to strategic government while citing the roles of debt, industrialization, and rapid world growth. Read More
From the bestselling authors of The Right Nation, a visionary argument that our current crisis in government is nothing less than the fourth radical transition in the history of the nation-state Dysfunctional government: It’s become a cliché, and most of us are resigned to the fact that nothing is ever going to change. As John Micklethwait and Adrian Wooldridge show us, that is a seriously limited view of things. In fact, there have been three great revolutions in government in the history of the modern world. The West has led these revolutions, but now we are in the midst of a fourth revolution, and it is Western government that is in danger of being left behind. Now, things really are different. The West’s debt load is unsustainable. The developing world has harvested the low-hanging fruits. Industrialization has transformed all the peasant economies it had left to transform, and the toxic side effects of rapid developing world growth are adding to the bill. From Washington to Detroit, from Brasilia to New Delhi, there is a dual crisis of political legitimacy and political effectiveness. The Fourth Revolution crystallizes the scope of the crisis and points forward to our future. The authors enjoy extraordinary access to influential figures and forces the world over, and the book is a global tour of the innovators in how power is to be wielded. The age of big government is over; the age of smart government has begun. Many of the ideas the authors discuss seem outlandish now, but the center of gravity is moving quickly. This tour drives home a powerful argument: that countries’ success depends overwhelmingly on their ability to reinvent the state. And that much of the West?and particularly the United States?is failing badly in its task. China is making rapid progress with government reform at the same time as America is falling badly behind. Washington is gridlocked, and America is in danger of squandering its huge advantages from its powerful economy because of failing government. And flailing democracies like India look enviously at China’s state-of-the-art airports and expanding universities. The race to get government right is not just a race of efficiency. It is a race to see which political values will triumph in the twenty-first century?the liberal values of democracy and liberty or the authoritarian values of command and control. The stakes could not be higher. Read Less

Goodreads reviews for The Fourth Revolution: The Global Race to Reinvent the State