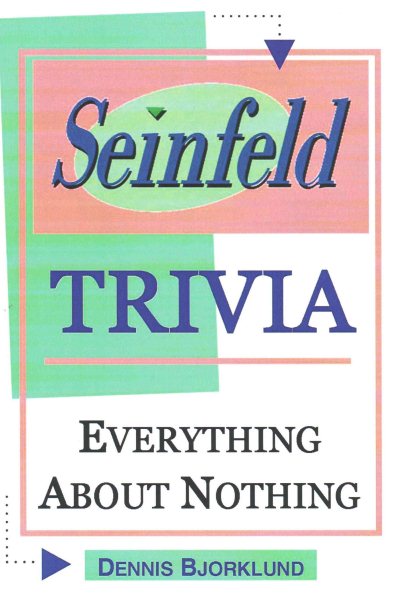 EDITED, REVISED, AND REPRINTED ON 12.8.17 TO CORRECT TYPOS AND OTHER ERRORS IN OLDER EDITIONS OF THI... Read More
EDITED, REVISED, AND REPRINTED ON 12.8.17 TO CORRECT TYPOS AND OTHER ERRORS IN OLDER EDITIONS OF THIS BOOKSeinfeld Trivia is authored by a sitcom expert who penned the most comprehensive trivia book that has ever been written about the show--Seinfeld Reference: The Complete Encyclopedia. The latest book, Seinfeld Trivia, is a literary gem that starts with general questions about the making of the show, which was voted “The #1 Greatest TV Series of All-Time” by TV Guide.The next section includes thorough questions into each significant character (Jerry Seinfeld, George Costanza, Cosmo Kramer, Elaine Benes, Newman, Frank Costanza, Morty Seinfeld) with not only the goal of helping you relive some of the most hilarious episodes, but also to test your attention to detail. There are some softball questions, but also there are brain-teasers.In addition, Seinfeld Trivia goes beyond the cast nucleus, and into the lives of other characters that helped make the show a success. You will be quizzed on Jerry’s parents, George’s parents, as well as many of the recurring regulars (Jerry Seinfeld, George Cotanza, Cosmo Kramer, Elaine Benes, Newman, Frank Costanza, Morty Seinfeld, David Puddy, Susan Ross), and famous guest stars (Babu Bhatt, Soup Nazi, Bizarro Jerry, Maestro, Mr. Pitt, J. Peterman, Jackie Chiles, Kenny Bania, Mr. Lippman, Sue Ellen Mischke), yada, yada, yada.There is something for everyone. Whether a casual watcher or avid fan, this book is sure to please everyone. Seinfeld Trivia also contains memorable episode clips and photos. Photos included, 116 pages.Dennis Bjorklund is a noted and well-respected television programming authority who has published many small screen books covering some of the best sitcoms in history. In addition to writing books, the Author provides literary contributions to numerous entertainment magazines, and appears on E! Entertainment and Biography Channel as an authoritative expert.Bjorklund is considered one of the foremost authorities on the television shows Cheers and Seinfeld, and the only person to write thoroughly comprehensive books on these situation comedies. Bjorklund continues to reside in California to remain close to the heart of network television programming.The Author has written several books on these television shows. Here is the list of available books related to Cheers and Seinfeld that have been written by Bjorklund:Toasting Cheers: An Episode Guide to the 1982-1993 SeriesCheers TV Show: A Comprehensive ReferenceCheers Trivia: It’s A Little Known Fact...Seinfeld Reference: The Complete EncyclopediaSeinfeld Trivia: Everything About NothingSeinfeld Secrets: An Insider Scoop About the ShowSeinfeld Ultimate Episode Guide Read Less

Goodreads reviews for Seinfeld Trivia: Everything About Nothing