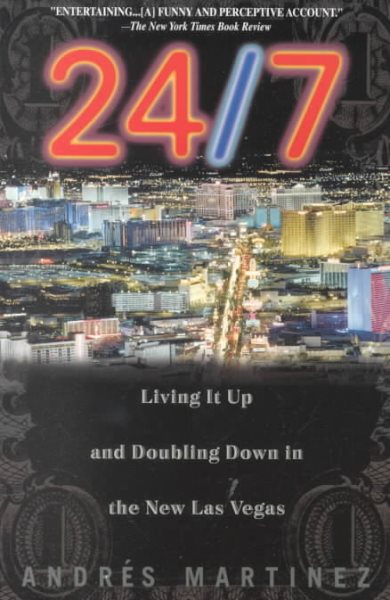 A journalist describes his month-long odyssey through the glittering, high-roller world of Las Vegas, providing a close-up look at diverse facets of the neon Babylon and its colorful inhabitants, including conventioneers, professional gamblers, and many others. Reprint. Read More
In the spring of 1998, mild-mannered, Ivy League-educated Andrés Martinez took $50,000--most of the advance his publisher was paying for this book--and headed to Las Vegas for thirty days, ten casinos, and a wild ride through the belly of a neon beast. The result: this brilliant, often hilarious chronicle of flesh, flash, and gambling in a city where everyone dreams of hitting the jackpot--and once in a while, someone actually does. From seedy strip clubs to sprawling suburbs, from the sumptuous Bellagio to the Liberace Museum, Martinez meets a host of colorful characters...gathering tricks of the trade from blackjack dealers and fellow bleary-eyed gamblers, attending Easter Sunday mass on the Strip, befriending a family man who raised six kids while losing eight million dollars as a sports gambler. An exhilarating joyride of a read, 24/7 is a breathless tour of America's Sin City...as seen through the eyes of a man making $1.65 million in wagers in a single month. Guess how much he took home? Read Less

Goodreads reviews for 24/7: Living It Up and Doubling Down

24/7: Living it Up and Doubling Down in the New Las Vegas

The Other Boleyn Girl