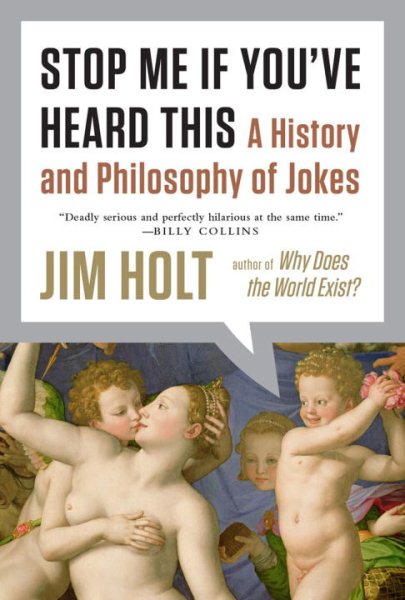 “Finally I understand what it is I’ve been laughing at all these years.”—Jimmy Kimmel Read More
From the best-selling author of Why Does the World Exist? comes this outrageous, uproarious compendium of absurdity, filth, racy paradox, and gratuitous offensiveness—just the kind of mature philosophical reflection readers have come to expect from the ever-entertaining Jim Holt. Indeed, Stop Me If You’veHeard This is the first book to trace the evolution of the joke all the way from the standup comics of ancient Athens to the comedy-club Seinfelds of today. After exploring humor’s history in Part One, Holt delves into philosophy in Part Two: Wall Street jokes; jokes about rednecks and atheists, bulimics and politicians; jokes you missed if you didn’t go to a Catholic girls’ school; jokes about logic and existence itself . . . all became fodder for the grand theories of Aristotle, Kant, Freud, and Wittgenstein in this heady mix of the high and low, of the ribald and profound, from America’s most beloved philosophical pundit. Read Less

Goodreads reviews for Stop Me If You've Heard This: A History and Philosophy of Jokes

Why Does the World Exist?: An Existential Detective Story

Why Does the World Exist?: An Existential Detective Story

Stop Me If You've Heard This: A History and Philosophy of Jo...