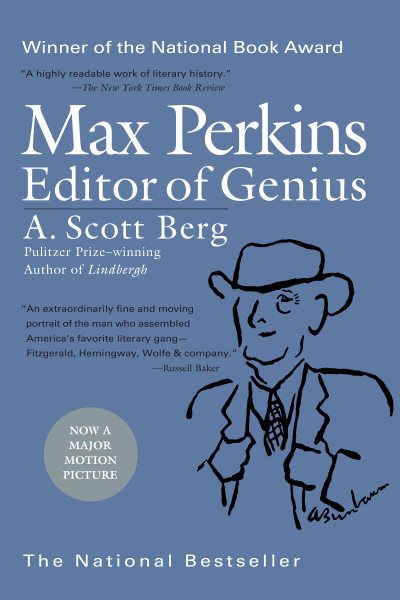 A thirtieth anniversary edition of the National Book Award-winning biography traces the life of the influential book editor who nurtured the literary talents of such twentieth-century masters as Ernest Hemingway, Thomas Wolfe, and F. Scott Fitzgerald. By the Pulitzer Prize-winning author of Lindbergh. Reprint. Read More
The National Book Award winner from Pulitzer Prize-winning author A. Scott Berg is now celebrating its 40th anniversary.The talents he nurtured were known worldwide: F. Scott Fitzgerald, Ernest Hemingway, Thomas Wolfe, and numerous others. But Maxwell Perkins remained a mystery, a backstage presence who served these authors not only as editor but also as critic, career manager, moneylender, psychoanalyst, father-confessor, and friend. This outstanding biography, a winner of the National Book Award, is the first to explore the fascinating life of this genius editor extraordinare—in both the professional and personal domains. It tells not only of Perkins’s stormy marriage, endearing eccentricities, and secret twenty-five-year romance with Elizabeth Lemmon, but also of his intensely intimate relationships with the leading literary lights of the twentieth century. It is, in the words of Newsweek, “an admirable biography of a wholly admirable man.”The basis for the Major Motion Picture Genius, Starring Colin Firth, Nicole Kidman, and Jude Law. Read Less