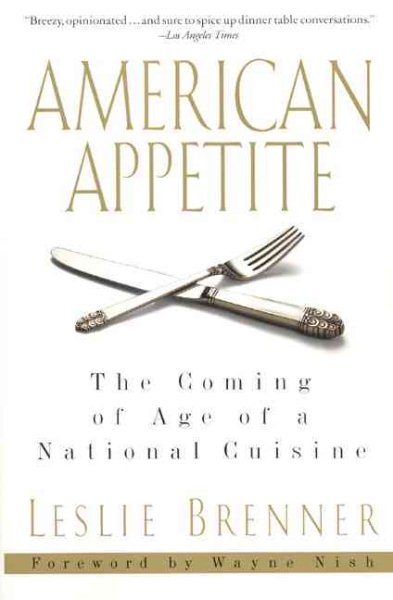 Chronicles the history of American cuisine, highlighting Native American influence, culinary movements, the impact of immigration on American foodways, and regional ingredients. Read More
Winner of the 1999 Versailles World Cookbook Fair Award For Best Culinary History, English LanguageIn Leslie Brenner's "witty and sumptuous" look at the history of the American food revolution, an award-winning food writer traces a fascinating culinary heritage and looks to a promising future. Hundreds of years ago, Native Americans feasted on regional ingredients like Olympia oysters, fresh herbs, and wild fowl. Now the best American chefs are returning to those roots. How did we get here? From the Puritan diet to Prohibition, from Julia Child through waves of immigration in the 1960s, Brenner traces the evolution of a national cuisine in delicious detail. Highlighted by interviews with Ameria's leading culinary innovators, including Julia Child, Alice Waters, and Robert Mondavi--and aided by heaping dollops of wit and opinion--Brenner serves up a singular history of American cuisine that will be of deep interest to anyone who loves to eat well. Read Less

Goodreads reviews for American Appetite: The Coming of Age of a National Cuisine

Fear of Wine: An Introductory Guide to the Grape

The Fourth Star: Dispatches from Inside Daniel Boulud's Cele...

The Fourth Star: Dispatches from Inside Daniel Boulud's Cele...