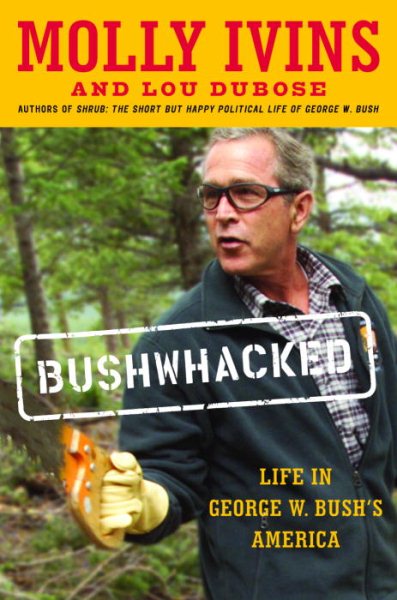 Offers a critique of the presidency of George W. Bush, describing how the same flawed policies he used to govern Texas have affected health and safety standards, the economy, and the environment. Read More
From Molly Ivins and Lou Dubose, authors of Shrub, Bushwhacked is a hilarious, no-holds-barred look at George W. Bush and his administration, and an essential book for understanding the full, destructive impact of his presidency.For years, bestselling political commentator Molly Ivins has been sounding the alarm about George W. Bush. In Shrub, her 2000 skewering of presidential candidate Bush, the inimitable Ivins, with co-author Lou Dubose, offered a devastating exposé of Dubya’s career and abysmal record as governor of Texas. Now, in their second book on our current White House occupant, Ivins and Dubose take the wire brush to the Bush presidency and show how he has applied the same flawed strategies he used in governing Texas to running the largest superpower in the world.Bushwhacked brings to light the horrendous legacy of the Bush tax cut, his increasingly appalling environmental record, his administration’s involvement in the Enron scandal, and the real Bush foreign policy—botched nation building in Kabul and Baghdad, alienation of former allies—and, unfortunately, much more. Ivins and Dubose go beyond the too frequently soft media coverage of Bush to show us just how damaging his policies have been to ordinary Americans—“the Doug Jones Average,” rather than the Dow Jones Average. Bushwhacked is filled with sharp observation, humor, and compassion for the people often ignored by the federal government and the Washington press corps.With the war on terrorism posing unprecedented challenges to our civil liberties, and with the Bush economic policy in shambles, it is high time for a close look at the state of our Union. Molly Ivins and Lou Dubose provide just that in Bushwhacked—an incisive, entertaining, and damning indictment of the Bush presidency.We've been BushwhackedMolly Ivins and Lou Dubose on:Dubya’s involvement in the failure of Harken Energy Corporation:“There are countless subjects on which George W. Bush might have pleaded ignorance in 1990, but a failing oil business was not one of them.”Dubya’s accomplishments as governor of Texas:“As full-time residents of the state that gave you tort reform, H. Ross Perot, and penis-enlargement options on executive health plans, we’re obliged to warn you that if Dubya Bush really had exported ‘the Texas Miracle,’ the country would be in deep shit.”Dubya’s environmental record:“Bush has a chemical-dependency problem, but it’s not cocaine. It’s Monsanto, Dow, and Union Carbide. They wrote the checks that put him in the Texas governor’s mansion....Bush had two voluntary emissions-control programs here in Texas. One involved polluting industries. The other was directed at adolescent males, who were encouraged to ‘try abstinence.’ Only 3 of our 8,645 most obnoxiously polluting refineries actually volunteered to cut back on their toxic emissions. Numbers on teenage boys are not yet in.”Why the Republican Party is the party of unregulated meat and poultry:“The Republicans win elections in the ‘red states’ in the center of the country, where cattle and chickens are produced and slaughtered. Democrats win their elections in the ‘blue states’ on the coasts. Republicans use the USDA to pay off their contributors in the red states. The result of that crude electoral calculus is laissez-faire food-safety policy whenever a Republican is in the White House. (If you must eat while the Republicans control the White House, both houses of Congress, and the judiciary, you might want to consider becoming a vegetarian about now.)” Read Less