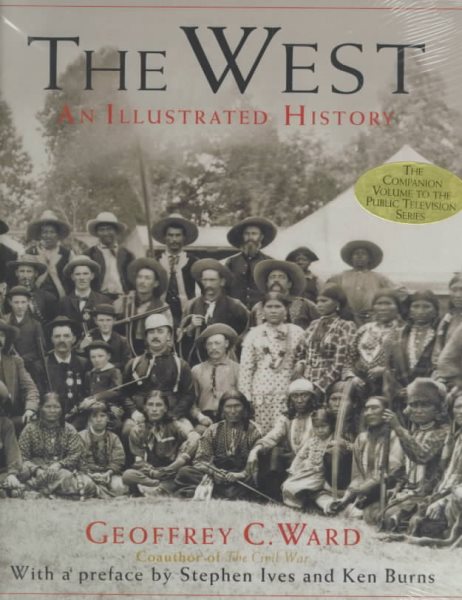 Presents a companion volume to the series tracing the history of the West Read More
In a vivid narrative that begins with the arrival of the first Europeans and ends well into the twentieth century, author Geoffrey C. Ward provides a gripping journey through the turbulent history of the region that has come to symbolize America around the world. Drawing upon hundreds of letters, diaries, memoirs, and journals as well as the latest scholarship. The West chronicles the arrival of wave after wave of newcomers from every direction of the compass, each of which invested the harsh but majestic western landscape with its own myths and desires and dreams.The cast is as rich and diverse as the western landscape itself - explorers and soldiers and Indian warriors, settlers and railroad builders and gaudy showmen. Coronado and Custer, Jesse James and Chief Joseph and Brigham Young and Buffalo Bill are all here. But so are scores of lesser-known westerners whose stories are no less compelling - a Chinese ditchdiggger and a rich Mexican landowner, a forty-niner from Chile and a Texas cowboy born in Britain, a woman missionary to the Indians who loathed the West and a Wellesley graduate who loved it in spite of everything it did to her and her family.The West explores the tensions between whites and the native peoples they sought to displace, but it also encompasses the Hispanic experience in the West, from the time of the conquistadors to the transformation of a Mexican-American village called Los Angeles into the region's major metropolis; the lives of Chinese immigrants who called the region "Gold Mountain"; and the ordeals of freed slaves from the South who sought a better life homesteading on the Great Plains.With essays by distinguished historians and writers about the West: Dayton Duncan, John Mack Faragher, David G. Gutierrez, Julie Roy Jeffrey, Patricia Nelson Limerick, N. Scott Momaday, T. H. Watkins, and Richard White. Read Less

Goodreads reviews for THE WEST An Illustrated History

Jazz: A History of America's Music