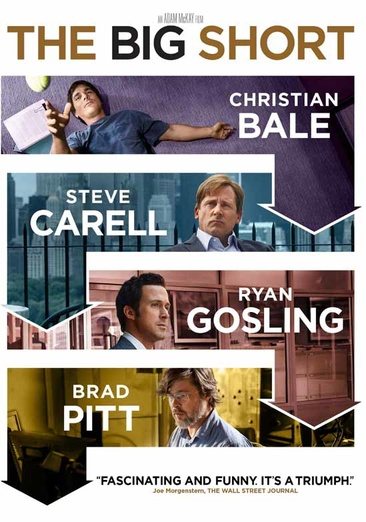 Four men who predicted the mid-2000s financial crisis attempt to make it big by using the "credit default swap" innovation. Read More
When four outsiders saw what the big banks, media and government refused to, the global collapse of the economy, they had an idea: The Big Short. Their bold investment leads them into the dark underbelly of modern banking where they must question everyone and everything. Starring: Academy Award® winner Christian Bale (The Fighter) and Academy Award® nominees Brad Pitt (World War Z), Ryan Gosling (Gangster Squad), and Steve Carell (Foxcatcher), Oscar-winning actresses Marisa Tomei (My Cousin Vinny) and Melissa Leo (The Fighter). Based on the shocking and unbelievable true story, and adapted from the New York Times best-seller by the author of Moneyball and The Blind Side. Read Less