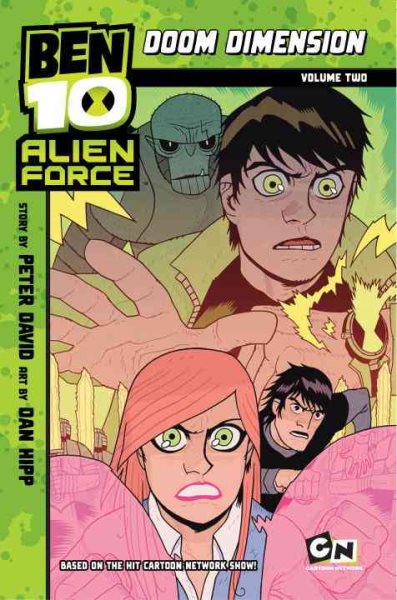 When young superhero Ben 10 and his friends investigate a wrecked spaceship and find the evil Forever Knights, Ben and the pilot of the ship, a bounty hunter who wants to kill Ben, get sent into an alternate reality together. Read More
THE ADVENTURES OF BEN 10 ARE OUT OF THIS WORLD Ben 10 remains stuck in the Fourth Dimension with Aztak, a bounty hunter who’s hit the jackpot and can’t wait to cash in—as soon as he sells the fifteen-year-old superhero and his amazing Omnitrix to the highest bidder.Meanwhile, Ben’s friends Gwen and Kevin think Ben’s been murdered. They blame the Forever Knights and can’t wait to annihilate the tech-stealing scoundrels—if they can ever find their hideout. But the Forever Knights plan to zap Gwen and Kevin with a weird gadget they grabbed from Aztak’s crashed spaceship (once they figure out how it works).Unfortunately for all concerned, that particular gadget has the power to blast everybody (and a good chunk of the neighborhood) to smithereens—unless Ben escapes the Fourth Dimension, eludes Aztak’s clutches, and finds the Forever Knights’ lair and his pals before time runs out.  Read Less