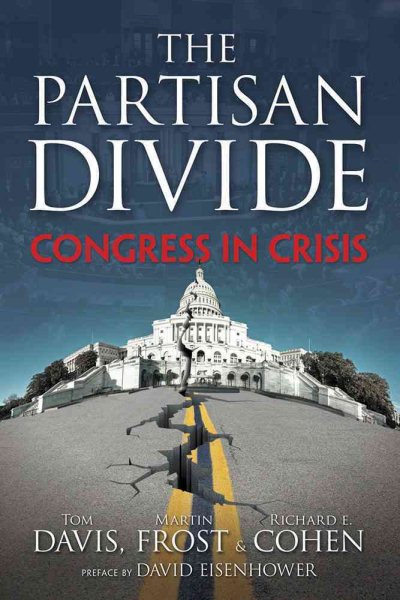 A Republican and a Democrat team up to dissect the causes of legislative gridlock and offer a common sense, bipartisan plan for making the United States Congress function again. Read More
"Martin Frost and Tom Davis are uniquely qualified to examine how constant conflict in Washington keeps too many good things from happening.The Partisan Divide: Congress in Crisis is a smart book that asks the right questions and offers some intriguing solutions." — President Bill ClintonDuring their 40 years in Congress, Martin Frost and Tom Davis were the field generals for their respective parties, each serving two terms as chair of the Democratic and Republican House campaign committees. Now they have joined forces — along with columnist Richard Cohen — in an effort to save Congress from itself.According to the authors, Congress is incapable of reforming itself without a good kick in the seat from the American public. Frost and Davis, with great insight and skill, along with a wealth of anecdotes and photos, dissect the causes of legislative gridlock and offer a common sense, bipartisan plan for making our Congress function again.The Preface by Pulitzer Prize finalist David Eisenhower sets the stage for this powerful behind-the-scenes narrative that uncovers the past road to the present political gridlock — and then offers thought-provoking insights and possibilities for the way out.A wide array of Republicans, Democrats, former presidents, and congressional colleagues, as well as many of today’s most highly respected news correspondents and analysts, have come together in broad, bi-partisan, consensus support for this book and its message.The Partisan Divide: Congress in Crisis is a fascinating "must-read" for the historically and politically curious — as well as every citizen of the United States!"As bipartisan progress becomes ever scarcer in Washington, Frost and Davis have come together to present thought-provoking ideas and insights from four decades of collective experience in Congress. In their powerful insiders’ account of the road into political gridlock, readers will find both the full extent of the problem and new possibilities for a way out." — Nancy Pelosi, Democratic Leader and 60th Speaker of the House"This book by two veteran politicians — one a Democrat and one a Republican — shows just how broken our political system is and how difficult it is going to be to get it back on track." — Bob Schieffer, Moderator ofFace the Nation and Chief Washington Correspondent CBS News Read Less

Goodreads reviews for The PARTISAN DIVIDE: Congress in Crisis

Why Dogs Do That: A Collection of Curious Canine Behaviors