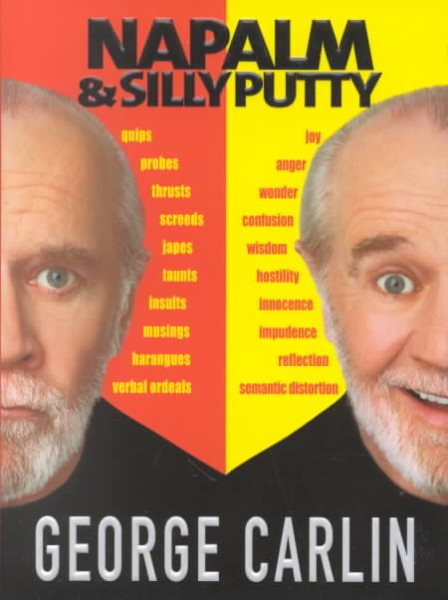 A comedic look at life's annoying universal truths discusses how a spy satellite can be a "spy" if they announce it on TV, why most people with low self-esteem have earned it, and "The Ten Most Annoying Songs of All Time." Read More
A hilarious new collection of razor-sharp observations from the New York Times bestselling author of Brain Droppings. Few comics make the transition from stage to page as smoothly or successfully as George Carlin. Brain Droppings spent a total of 40 weeks on the New York Times bestseller list, and this new one is certain to tickle even more ribs (and rattle a few more cages) with its characteristically ironic take on life's annoying universal truths. In Napalm & Silly Putty, Carlin doesn't steer clear of the tough issues, preferring instead to look life boldly in the eye to pose the questions few dare to ask: How can it be a spy satellite if they announce on TV that it's a spy satellite? Why do they bother saying "raw sewage"? Do some people cook that stuff? In the expression "topsy-turvy," what exactly is meant by "turvy"? And he makes some startling observations, including: Most people with low self-esteem have earned it. Guys don't seem to be called "Lefty" anymore. Most people don't know what they're doing, and a lot of them are really good at it. Carlin also waxes wickedly philosophical on all sorts of subjects, including: KIDS--They're not all cute. In fact, if you look at them closely, some of them are rather unpleasant looking. And a lot of them don't smell too good either. DEATH ROW--If you're condemned to die they have to give you one last meal of your own request. What is that all about? A group of people plan to kill you, so they want you to eat something you like? Add to the mix "The Ten Most Embarrassing Songs of All Time," "The 20th Century Hostility Scoreboard," and "People I Can Do Without," and you have an irresistibly insouciant assortment of musings, questions, assertions, and assumptions guaranteed to please the millions of fans waiting for the next Carlin collection--and the millions more waiting to discover this comic genius. Read Less