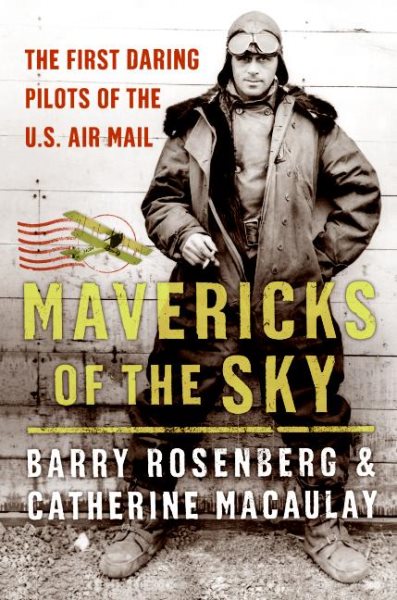 Recounts the exploits of America's first commercial aviators who risked their lives in a fleet of flimsy World War I biplanes to transport the mail across America, and who played a key role in the early history of commercial aviation. Read More
The dramatic story of the first daredevil pilots of the U.S. Air Mail Service who risked their lives daily to map new aviation routes, which are still in use today, and deliver mail throughout the U.S. It was the pilots of the U.S. Air Mail service who made it possible for flight to evolve from an impractical and deadly fad to today's worldwide network of airlines. Nicknamed "The Suicide Club," this small but daring cadre of pilots took a fleet of flimsy World War I "Jenny" Biplanes and blazed a trail of sky routes across the country. In the midst of the Jazz Age, they were dashing, group–proud, brazen, and resentful of authority. They were also loyal, determined to prove the skeptics wrong. Mavericks Of The Sky, by Barry Rosenberg and Catherine Macaulay, is a narrative non–fiction account of the crucial, first three years of the air mail service – beginning with the inaugural New York–to–Washington D.C. flight in 1918, through 1921 when aviator Jack Knight was the first to fly across the country at night and furthermore, through a blizzard. In those early years, one out of every four men lost their lives. With the constant threat of weather and mechanical failure and with little instrumentation available, aviators relied on their wits and instincts to keep them out of trouble. Mavericks Of The Sky brings these sagas to life, and tells the story of the extraordinary lives and rivalries of those who single–handedly pulled off the great experiment. Drawing on numerous first–hand accounts, Mavericks Of The Sky brings to life the nationwide effort to establish air mail service, focusing on the exploits of the most daring and colorful pilots – pioneers who proved the great American belief that anything is possible with conviction, diligence, and perseverance. Read Less

Goodreads reviews for Mavericks of the Sky: The First Daring Pilots of the U.S. Air Mail

Fingers in the Door and Other Stories