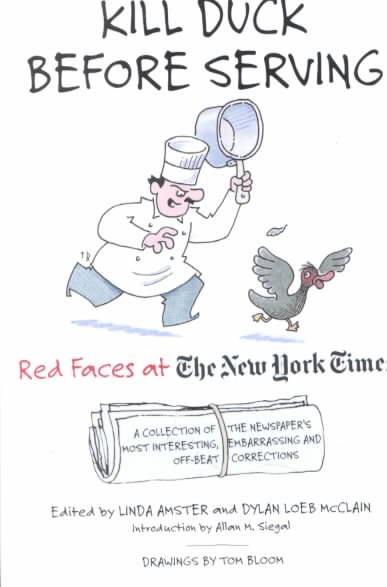 A humorous compilation of errors, inaccuracies, and misunderstandings from the pages of The New York Times encompasses everything from careless oversights and historical goofs to flopped photographs, misidentifications, and whimsical typos. Original. Read More
That's Fit to Print""All the NewsOn June 21, 1950, the front page slogan appeared like this. By the time the error was noticed, it was too late to correct it that day. But it was corrected, in a manner of speaking, the next day and every day thereafter.Even Homer nods. Some mistakes are careless oversights while others are genuine howlers. This irresistible collection of notable errors from the pages of The New York Times includes everything from gross historical inaccuracies, glaring misidentifications, and disastrous recipes to a wide range of inexplicable, unsupportable boners. Kill Duck Before Serving is a quirky selection of all the corrections fit to print by one of our most esteemed newspapers.March 11, 1975In yesterday's issue, The New York Times did not report on riots in Milan and the subsequent murder of the lay religious reformer Erlembald. These events took place in 1075, the year given in the dateline under the nameplate on Page 1. The Times regrets both incidents.April 7, 1995Because of a transcription error, an article about Senator Alfonse M. D'Amato's remarks about Judge Lance A. Ito misquoted the Senator at one point. In his conversation with the radio host Don Imus, he said: "I mean, this is a disgrace. Judge Ito will be well known." He did not say, "Judge Ito with the wet nose."October 22, 2000An article about Ivana Trump and her spending habits misstated the number of bras she buys. It is two dozen black, two dozen beige and two dozen white, not two thousand of each.July 14, 1985A report misidentified the document on which John Hancock put his famous prominent signature. It was the Declaration of Independence, not the Constitution. Read Less

Every Day On Earth: Fun Facts That Happen Every 24 Hours

Don't Know Much About Planet Earth