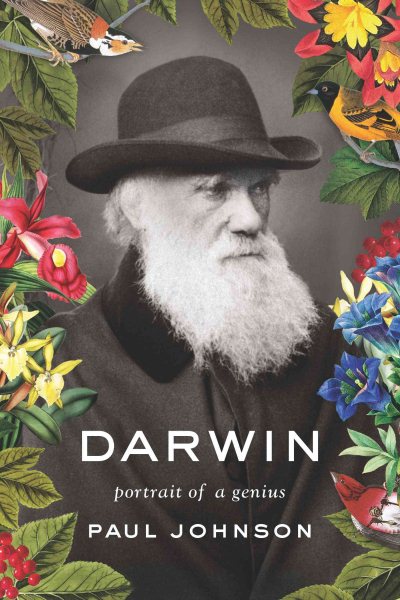 Recounts the life and career of the evolutionary scientist that places his achievements against a backdrop of his time and covers such topics as his voyage aboard the Beagle and the long-delayed publication of "Origin of Species." Read More
This light biography of Charles Darwin is by British popular historian Paul Johnson. Like Steven Jay Gould, Johnson writes in an opinionated style, likes to debunk authority figures, and knows how to exaggerate for effect. Johnson lacks Gould's passion for justice and his knowledge of science, both problems for the book's central argument: that Darwin was a sloppy scientist who created racism through his ignorance of anthropology. Unfortunately, Darwin was ignorant of anthropology because it didn't exist at the time. The realities of 200 years ago are not mentioned here: child labor and malnutrition distorted brains and bodies along class and ethnic lines, modern medicine didn't exist, and most anti-evolutionists believed non-Europeans were non-human apes or monkeys. In science, genetics was unknown, and social and biological science was one field. Johnson relabels all these historical facts as personality traits and personal failures of Charles Darwin. If Darwin were really so smart, and not a racist, the author argues, you'd never know such things from reading his work. The book's banner claim is that Darwin was the architect of imperialism and personally responsible for Social Darwinism. As a historian, Johnson presumably knows better and is just having fun. But readers who believe him will tend to conclude that racism was personally invented by Charles Darwin. (The author admits in passing that the peddlers of the prejudices later named after Darwin were busy peddling well before Darwin wrote.) Johnson's approach may seem an innocent amusement in the UK, a kind of saint-tipping. In the US, bitter wars over evolution can make the book read as exploiting race in the service of anti-science politics. The book will not help readers understand Darwin or the very real problem of scientific prejudice, but as an exercise in shooting haloes, readers who can ignore the politics may find it fun. Annotation ©2012 Book News, Inc., Portland, OR (booknews.com) Read Less

Goodreads reviews for Darwin: Portrait of a Genius

A History of the Jews

The Time of the End: Prophecy Seminar