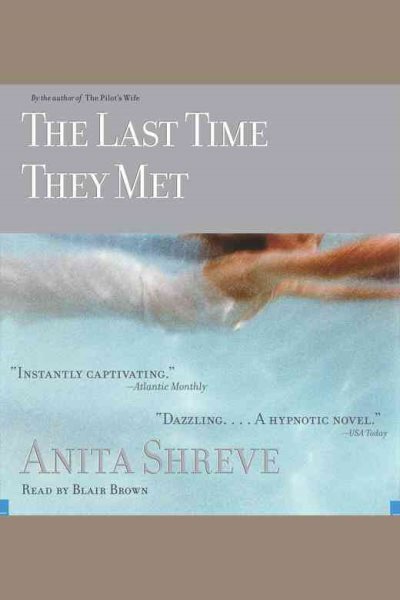 Meeting Thomas Janes for the third time, widowed Linda Fallon remembers their two previous encounters, the second of which involved an affair with him that shattered her life. 200,000 first printing. Read More
Linda Fallon encounters her former lover, Thomas Janes, at a literary festival where both have been invited to give readings from their work. It has been years since their paths crossed, and in that time Thomas has become a kind of literary legend. His renown is enhanced by his elusiveness; for most of the past decade, he has remained in seclusion following a devastating loss.This is no chance meeting. Thomas learned that Linda was reading at the festival and chose this moment to reestablish contact with a woman he passionately pursued years earlier. Their affair was disastrous, and a turning point in both their lives. Neither the intensity of their relationship nor the damage it did has ever been far from his memory.From the moment they speak, The Last Time They Met unfolds the story of Linda and Thomas in an extraordinary way: it travels back into their past, bypassing layers of memory and interpretation to present their earlier encounters with unshakable immediacy. In Africa, when Linda and Thomas were twenty-seven, and in Massachusetts, when they were in high school, the novel re-creates love at its exhilirating pinnacle - the kind of intense connection that becomes the true north against which all relationships are measured.Moving backward through time, The Last Time They Met traces the shocking resonance a single choice, even a single word, can have over the course of a lifetime. At the same time, the novel creates an almost unbearable mystery, a mystery that can be understood fully only in the novel's final pages, in the eyes of young Linda Fallon and the young man who loves her. Read Less

Goodreads reviews for The Last Time They Met: A Novel

The Stars Are Fire

The Weight of Water