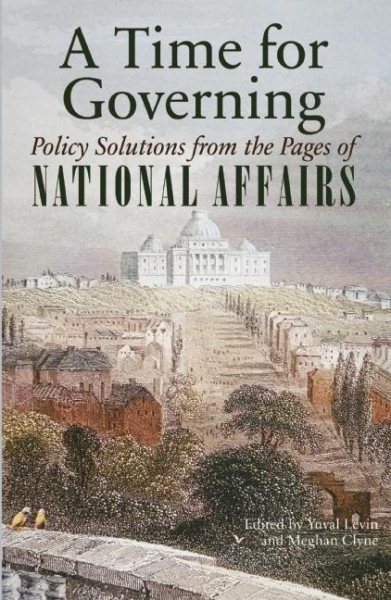 Launched in 2009, National Affairs is a quarterly journal addressing US domestic policy and political economy that was launched as a successor to The Public Interest (with which it shares a similar ideological pedigree). This volume collects 18 articles from the first three years of the quarterly, each addressing a significant area of public policy in the United States. Topics discussed include approaches to medical insurance and healthcare, social security, means testing in welfare, tax reform, the regulation of financial risk and bank capital, monetary policy reform, educational reform, state finances, public sector pensions, and public sector unions. Annotation ©2012 Book News, Inc., Portland, OR (booknews.com) Read More
America finds itself in a moment of profound and complex governing challenges. A crushing recession followed by a feeble recovery have shaken the foundations of our financial and economic system. We are struggling with the exploding costs of health-care and entitlement spending, and fiscal disaster looms as our society ages. American families are anxious about wage stagnation, barriers to social mobility, and the nation’s competitiveness in an era of globalization. Meanwhile, our large governing institutions — most of them designed several decades ago — are showing signs of strain and decay, calling out for serious reform. National Affairs, a quarterly journal of essays on domestic policy and political economy, was launched in 2009 to help Americans think more clearly about these problems and to develop promising solutions. This book is a collection of some of the most timely and concrete policy proposals published in the journal’s pages, offering ideas for reforming our welfare state, our tax system, financial regulation, monetary policy, education, state finances, and more. Each essay was written by a prominent expert in the field—the authors are all notable right-leaning academics, policy experts, former government officials, or think tank scholars with national reputations. The book thus comprises a ready-made domestic policy agenda for conservative policymakers (including a Republican president, should one be elected in 2012), based on the latest and best thinking from the world of conservative policy intellectuals. It will be the only resource of its kind in this election year—a one-stop-shop for conservative policy ideas. Read Less

Goodreads reviews for A Time for Governing: Policy Solutions from the Pages of National Affairs

Religion and the American Future