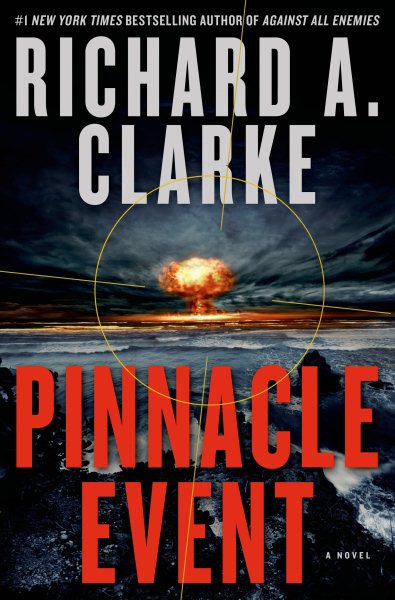 Five simultaneous murders on three continents during the 2016 presidential election trigger an international hunt to identify who has come into the possession of five nuclear weapons and who they are targeting. Read More
Bestselling author Richard A. Clarke draws upon his experience at the highest levels of national security in Pinnacle Event—the Pentagon code for a nuclear threat—a gripping international thriller told from the rare vantage point of a true Washington insider. With a presidential election just weeks away, five simultaneous murders on three continents lead to an investigation revealing the recent black-market sale of five nuclear weapons. But who bought them? And what is their intended target? “Clarke combine[s] real-life intelligence details with…narrative drive...will please political geeks and action fans.”—Booklist Washington fears the attacks are timed to explode in major American cities before the election. They call on veteran intelligence expert Ray Bowman to track down the missing nukes. Now, with the help of a Mossad agent and a female South African intelligence officer, Ray follows a trail—one that takes him across the globe and back—to put a stop to the destruction. Along the way, Ray discovers that those who control the arsenal are behind a far more sinister plot than he could have imagined. . .and they will stop at nothing to achieve their means. And time is running out. “Clarke delivers an edge-of-your-seat race across the planet that keeps you guessing until the very end.”—Kyle Mills, New York Times bestselling author Read Less

The Forgetful Letter B: Fun-filled Tales of Very Little Peop...

The Fifth Domain: Defending Our Country, Our Companies, and...

Cyber War: The Next Threat to National Security and What to...