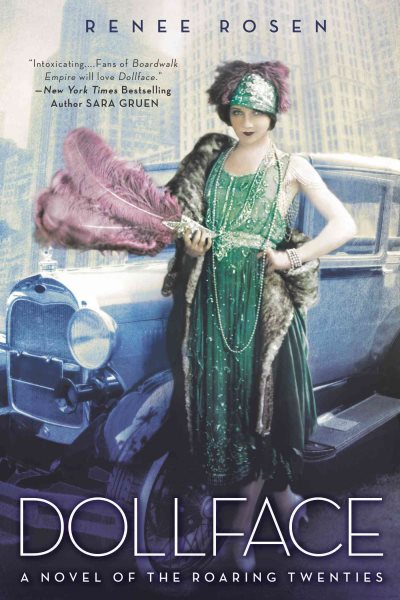 Touring the nightclubs of 1920s Chicago in the hopes of enjoying an exciting life, beautiful Vera captures the attentions of two high rollers who admit her into the risky underworld of jazz, gambling, bootleg bourbon, and organized crime. Read More
America in the 1920s was a country alive with the wild fun of jazz, speakeasies, and a new kind of woman—the flapper.Vera Abramowitz is determined to leave her gritty childhood behind and live a more exciting life, one that her mother never dreamed of. Bobbing her hair and showing her knees, the lipsticked beauty dazzles, doing the Charleston in nightclubs and earning the nickname “Dollface.” As the ultimate flapper, Vera captures the attention of two high rollers, a handsome nightclub owner and a sexy gambler. On their arms, she gains entrée into a world filled with bootleg bourbon, wailing jazz, and money to burn.  She thinks her biggest problem is choosing between them until the truth comes out. Her two lovers are really mobsters from rival gangs during Chicago’s infamous Beer Wars, a battle Al Capone refuses to lose. The heady life she’s living is an illusion resting on a bedrock of crime and violence unlike anything the country has ever seen before. When the good times come to an end, Vera becomes entangled in everything from bootlegging to murder. And as men from both gangs fall around her, Vera must put together the pieces of her shattered life, as Chicago hurtles toward one of the most infamous days in its history, the St. Valentine’s Day Massacre. READERS GUIDE INCLUDED Read Less

Goodreads reviews for Dollface: A Novel of the Roaring Twenties

What the Lady Wants: A Novel of Marshall Field and the Gilde...

Every Crooked Pot: A novel