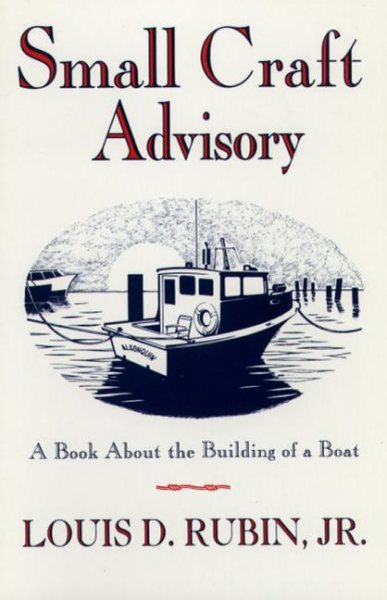 The author explores his obsession with boats, and describes his years of often hilarious boating adventures Read More
Small Craft Advisory is an enchanting book about Louis Rubin’s obsession with boats and his years of often hilarious boating adventures.When Louis Rubin was thirteen, he built a leaky little boat and paddled it out to the edge of the ship channel in Charleston, South Carolina, where he felt the inexorable pull of the water. Fifty years and dozens of boats later?sailboats, powerboats, inboards and outboards?the pull is as strong as ever.In the tradition established by Mark Twain, Joseph Conrad, and Herman Melville, distinguished author and scholar Louis Rubin explores man’s longtime passion for boats. He examines the compulsion that has prompted him and hundreds of thousands of other non-nautical persons to spend so much time, and no small portion of their incomes, on watercraft that they can use only infrequently.As his new boat (a cabin cruiser made of wood on a workboat hull) is being built, Rubin tells of his past boats and numerous boating disasters and draws a poignant comparison between his two passions: watercraft and the craft of writing.Anyone who has ever bought and owned a boat?or wondered why people are obsessed by them?will love this amusing, evocative, beautifully crafted memoir by an inveterate boat-owner. Read Less

Goodreads reviews for Small Craft Advisory: A Book About the Building of a Boat

The Edge of the Swamp: A Study in the Literature and Society...

George W. Cable: the life and times of a Southern heretic (P...