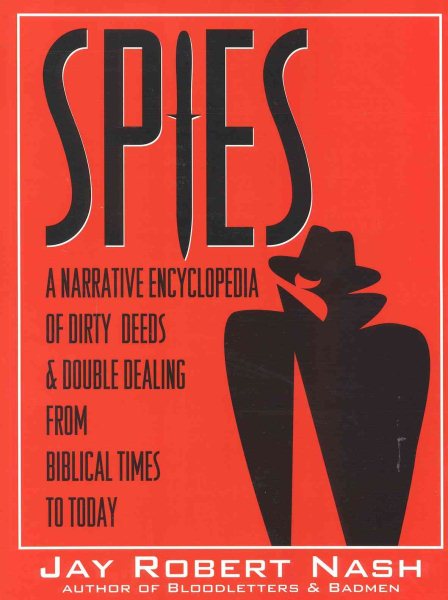 Cloaks, daggars, and skeletons in the closet! Read the secrets of real secret agents. Read More
Spies is a book that covers every important and many obscure spies and espionage agencies throughout history. Here are profiles of important agents, from Sinon, who convinced the Trojans to take the huge Greek wooden horse into their seemingiy impregnable city, to America's arch traitor and Soviet agent inside the CIA, Aldrich Ames. Here are the super spies Richard Sorge, Leopold Trepper, Isaac Trebitsch Lincoln, Rudolf Abel, and the indomitable spymasters - America's William "Wild Bill" Donovan, Allen Dulles, Richard Helms; England's Vernon Kell and Mansfield Cumming; Germany's Walther Nicolai, Wilhelm Canaris, and Reinhard Gehlen.All the great and sinister spy agencies from around the world are described - the American Black Chamber, OSS, CIA, NSA; the czarist Okhrana; the Soviet NKVD/KGB; the French Deuxieme Bureau, DGSE, DST, SDECE, Suret-Nationale; the British MI5, MI6, SIS; the secret bureaus of China, Australia, Japan, and Germany.In the hundreds of separate entries (illustrated with scores of photos and drawings), the world's history of espionage can be traced, and the spies, both great and small, male and female, who changed the course of history, can be found.Supplementing the main text is the most exhaustive glossary of espionage acronyms and terms ever assembled; a filmography of dozens of films, which pinpoints for the first time the real-life spies and spy organizations on which these films are based; and what is certainly the most extensive bibliography ever offered in the field of espionage. Read Less

Goodreads reviews for Spies: A Narrative Encyclopedia of Dirty Tricks and Double Dealing from Biblical Times to Today

Bloodletters and Badmen: A Narrative Encyclopedia of America...

Among the Missing : An Anecdotal History of Missing Persons...