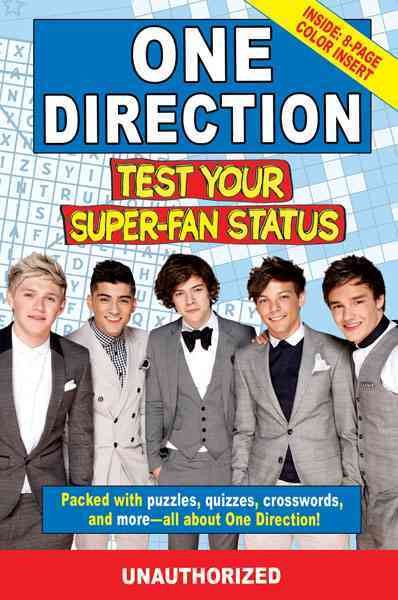 Uses trivia games, puzzles, and quizzes to test the reader's knowledge of the musical group One Direction. Read More
They're the biggest music sensation to arrive in the United States in years. Young audiences on both sides of the Atlantic cheered One Direction through the X-Factor competition--and with their arrival in America, kids have gone wild over their brand-new Columbia Records album release "What Makes You Beautiful." Now, American audiences can test themselves by measuring their true trivia knowledge about this super British-Irish boy band. One Direction: Test Your Super-Fan Status is packed with cool quizzes, tricky trivia questions, word searches, crossword puzzles, and much more. Every feature is designed to test each fan's knowledge about Niall Horan, Zayn Malik, Liam Payne, Harry Styles, and Louis Tomlinson. Kids will also love a bonus feature--eight pages of color photos of the band's five stars that includes a tricky "Spot the Difference" puzzle. Every fan of this hit band will want to grab a pen, then start turning the pages and answering the questions. When they've reached the last page they'll know exactly what kind of One Direction fan they really are! Read Less

Goodreads reviews for One Direction: Test Your Super-Fan Status: Packed with Puzzles, Quizzes, Crosswords, and More

I Love Niall: Are You His Ultimate Fan? (I Love One Directio...

A Memoir of Sebastian Cabot; With A Review of The History of...

A popular treatise on the hair, its growth, care, diseases a...