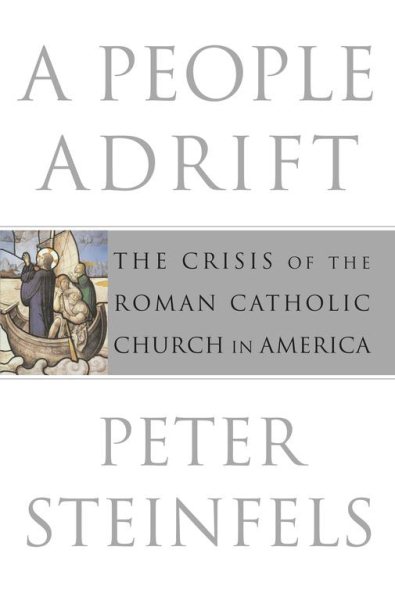 Predicts a significant decline in the Roman Catholic Church in the United States, examining its responses to important issues, noting twentieth-century changes, and making suggestions about how the faith should be redirected. Read More
In A People Adrift, a prominent Catholic thinker states bluntly that the Catholic Church in the United States must transform itself or suffer irreversible decline. Peter Steinfels shows how even before the recent revelations about sexual abuse by priests, the explosive combination of generational change and the thinning ranks of priests and nuns was creating a grave crisis of leadership and identity. This groundbreaking book offers an analysis not just of the church's immediate troubles but of less visible, more powerful forces working below the surface of an institution that provides a spiritual identity for 65 million Americans and spans the nation with its parishes, schools, colleges and universities, hospitals, clinics, and social service agencies. In A People Adrift, Steinfels warns that entrenched liberals and conservatives are trapped in a "theo-logical gridlock" that often ignores what in fact goes on in families, parishes, classrooms, voting booths, and Catholic organizations of all types. Above all, he insists, the altered Catholic landscape demands a new agenda for leadership, from the selection of bishops and the rethinking of the priesthood to the thorough preparation and genuine incorporation of a lay leadership that is already taking over key responsibilities in Catholic institutions. Catholicism exerts an enormous cultural and political presence in American life. No one interested in the nation's moral, intellectual, and political future can be indifferent to the fate of what has been one of the world's most vigorous churches -- a church now severely challenged. Read Less

Goodreads reviews for A People Adrift : The Crisis of the Roman Catholic Church in America

A People Adrift: The Crisis of the Roman Catholic Church in...

The Neoconservatives: The Men Who Are Changing America's Pol...