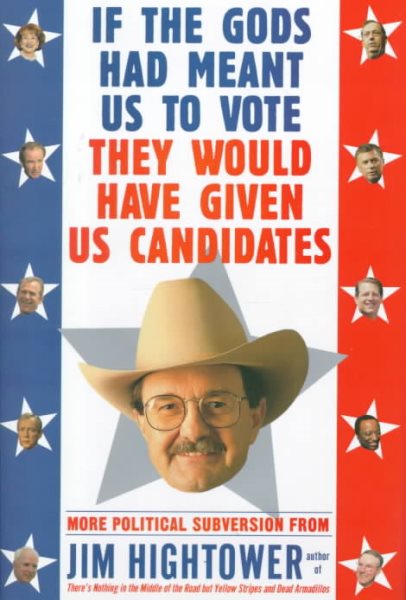 The outspoken critic of American politics urges readers to take back their birthright at the polls Read More
If anything, in this presidential election special, he's madder than ever!In his earlier bestseller, There's Nothing in the Middle of the Road but Yellow Stripes and Dead Armadillos, Hightower only began to tap into the deep yearning that Americans have for a new politics that speaks to them from a real-world, kitchen-table perspective. Now, with the year 2000 being an especially significant marker for contemplating our country's direction, not only for the new year but for the new century and the new millennium, it's time for citizens to reclaim their political, economic, and cultural heritage.Leading the way with his hilariously irreverent yet profoundly serious book is our name-naming, podium-pounding, point-them-in-the-right-direction populist, Hightower himself. He whacks conventional wisdom right upside the head,showing,with startling facts and compelling personal stories, that despite a so-called period of prosperity, America's middle class is getting mugged, and that far from being ordained by the gods,globalization is globaloney! Hightower rips the mass off of the candidates, the parties, the consultants, and especially the moneyed powers whoa re supporting all of the leading presidential hopefuls. he's mad about them all--but what he's maddest about, what really gets his goat,is that they are all the same! To paraphrase Jim, American politicians are alike because they don't come cheap. In fact, they're all very expansive. which is why only the rich can own them and why their allegiance is definitely not to regular,worka-day citizens.No one is spared in this insightful and engaging blend of horror and success stories, hard-hitting commentary, laugh-out-loud humor, useful facts, and sparkling language. An equal opportunity muckraker and conscientious agitator for "We the people," Hightower inspires us to take charge again, to build a new politics, and, together, to build a better tomorrow. Jim Hightower's If the Gods Had Meant Us to Vote They Would Have Given Us Candidates proves yet again that his is a uniquely wise and peerlessly singular voice in the maelstrom of political prattle. Read Less