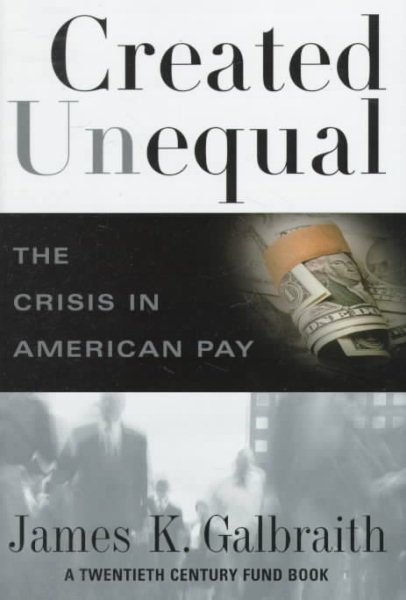 Demonstrates how governmental policies have financially polarized the American workforce and rewarded or punished specific industries, and offers suggestions on how to close the wage gap Read More
If our economy is doing so well, why are so few of us better off? The answer: rising wage inequality. Since the early 1970s, the gains of growth have gone almost entirely to a small fraction of the wealthiest and most powerful. Today, American wage inequality is a national crisis, and the question must be: What are we going to do about it? In an impassioned argument backed by impressive statistical evidence, James Galbraith shows that inequality is not inevitable, nor irreversible, nor the result of impersonal market forces. Instead, blame belongs to specific political decisions and the poor economic performance they produced. And the solution lies within reach, through a return to an economic policy commited to full employment, low and stable interest rates, strong and stable economic growth, and control of inflation by civilized means. For decades before 1970, America was home to booming technological progress amidst a stable relationship between rich and poor. We were, in those years, a true middle-class society. It was only when the government decided to abandon the goal of full employment, to fight inflation by throwing people out of work, and to use high interest rates like a bludgeon, that inequality began to threaten the American dream. In Created Unequal, Galbraith explains the relationship between economic policy and the structure of pay. He shows why "knowledge" workers have done well and why service workers have not; why consumer industries have lost ground and why the true service economy is smaller than you think. Whether you are in the aircraft industry (rich) or the garment business (poor), medicine (up-and-coming despite HMOs) or residential construction (in deep decline), you will be surprised and provoked by his findings. Most of all, Galbraith gives us all hope that we can reclaim our country through economic understanding, commonsense policy, and political action. Read Less

Goodreads reviews for Created Unequal: The Crisis in American Pay

The Nature and Logic of Capitalism