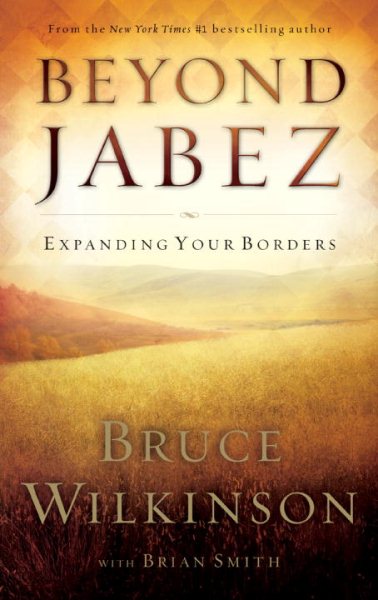 Presents further discussion of the prayer from the Old Testament, covering each of the four sections in detail, and including suggestions to make this passage part of a prayer life. Read More
“Director’s Cut” of Jabez Follows Up on Spiritual Phenomenon Bruce Wilkinson’s breakthrough teaching in The Prayer of Jabez captivated millions and continues to lead to changed lives around the world. This follow-up message discusses in greater detail the specific steps to take in making this scriptural passage part of your prayer life. For each of the prayer’s four sections, Wilkinson explains important biblical distinctions, answers misconceptions about the prayer, offers practical steps to praying the prayer, and shows potential results in readers’ lives. New content, exciting Jabez-inspired stories, and enriched commentary from Dr. Wilkinson make this a must-have for anyone who wants to live a world-changing life for God.Go Deeper. Farther. BEYOND. When people passionately pray, God doesn’t just listen. He responds! Where the #1 New York Times bestseller The Prayer of Jabez left off, Beyond Jabez picks up and goes even deeper. Priceless testimonies of answered prayer and bold, biblical teaching clear up the misconceptions surrounding this once little-known prayer. Is it really right to ask God to bless me? How can I experience the miracles accompanying a Jabez lifestyle? The answers inside will destroy doubt and sound the trumpet blast announcing a glorious new chapter in your walk with the Lord! Are you ready? Because God is still moving—and asking you to do the same! Inside Left Flap Dare to Go There. True Stories When The Prayer of Jabez sold nine million copies in two years, Bruce Wilkinson’s mailbox was flooded with countless personal stories of answered prayer. God’s mighty hand was using the prayer to change lives in both small and dramatic ways. Such undeniable testimonies make it impossible to ignore God’s presence, active and alive today! Refreshing Clarity Beyond Jabez examines the larger biblical context of the once little-known prayer found in 1 Chronicles 4:9–10. Wilkinson’s sound instruction answers the skepticism surrounding the Jabez phenomenon and returns an awesome sense of wonder to the miracle of prayer. Deeper Application Packed with practical guidance from a man who daily prays Jabez’s prayer—and has for more than thirty years!— Beyond Jabez reveals how, with a sincere heart and a devoted prayer life, God can use you mightily for His purposes! Story Behind the BookBruce Wilkinson spent thirty years studying and praying the prayer of Jabez. The original manuscript was over three hundred pages long. When The Prayer of Jabez was released in the spring of 2000, it had been culled down to 96 pages. It was originally intended as a gift from Bruce to the attendees of the 2000 National Day of Prayer. Now in 2005, the fifth anniversary of the release of the original Prayer of Jabez, the release of Beyond Jabez will be more like the book Bruce Wilkinson originally intended to write—a book with more teaching, stories of God’s blessings, and more application of what God intended of us in petitioning Him. Read Less

Goodreads reviews for Beyond Jabez: Expanding Your Borders

The Prayer of Jabez: Breaking Through to the Blessed Life (B...

The Prayer of Jabez: Breaking Through to the Blessed Life