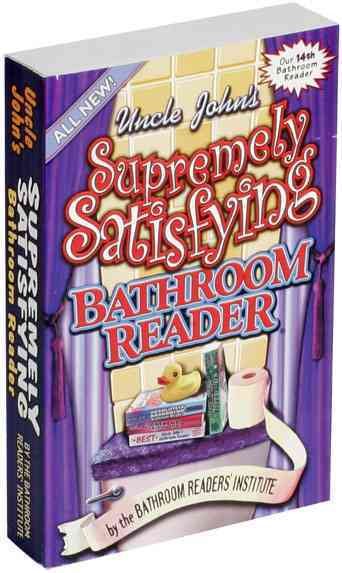 This is the 14th all-new edition in our "classic" series, Uncle John's Supremely Satisfying Bathroom Reader, overflows with an enormously diverse selection of topics. The team at the Bathroom Readers' Institute have flushed out stories that will be sure to make your visits to the throne truly satisfying, including: *History of Political Parties *How we got the Dollar Part 2 *First Star Trek Convention *History of Tipping *Story of Garlic; History of Chocolate *Kung Fu *History of Sgt. Pepper, Rock's Greatest Album *History of Peanuts - the cartoon *How Does Soap Work? *History of the Bra *Origin of the Match *Origin of the Paperclip *Origin of Football Read More
Supreme satisfaction awaits you in Uncle John’s 14th all-new edition, which covers a whole host of topicsfrom the silly (a branding iron for hot dogs), to the bizarre (an exploding whale), to the profound (the rise of the Democratic and Republican parties). Since 1987, the Bathroom Readers’ Institute has led the movement to stand up for those who sit down and read in the bathroom (and everywhere else for that matter). With more than 11 million books in print, theUncle John’s Bathroom Reader series is the longest-running, most popular series of its kind in the world.Where else could you learn how soap works, why people started tipping, and the history of chocolate? Uncle John rules the world of information and humor, so get ready to be thoroughly entertained. Read all about…Dumb 9-1-1 calls22 things that fell from the skyHow Star Trek went from failed series to cult phenomenonThe origins of football, photography, soap operas, and paperclipsQuack medicines from yesterday and todayThe Uplifting” history of the braAnd much more! Read Less

Uncle John's Best of Briefs: Trivia You Can Take Anywhere