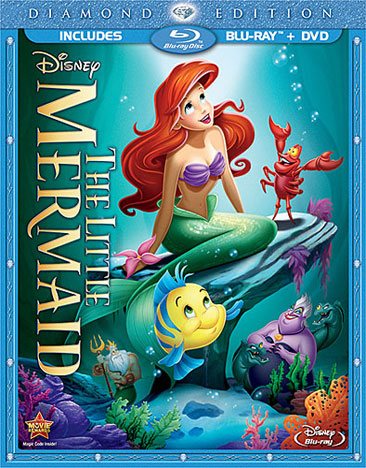 A headstrong mermaid falls in love with a human prince and makes a faustian bargain with an unscrupulous sea witch to become human. Read More
"With unforgettable characters, thrilling adventures, soaring Academy Award winning music (1989: best music, original score, and best music, original song, “Under The Sea”), The Little Mermaid is one of the most celebrated animated films of all times, now spectacularly transformed for the first time on Blu-ray, with digitally restored picture and brilliant high-definition sound! Venture under the sea where Ariel, a free-spirited mermaid princess longs to be part of the human world. After bravely striking a bargain with Ursula – a sneaky sea witch – Ariel embarks on the adventure of a lifetime. With Flounder and Sebastian at her side, Ariel will need all of her courage and determination to make things right in both of her worlds. Finally releasing from the Disney Vault for a limited time only. First time on Diamond Edition Blu-ray combo pack and HD digital." Read Less