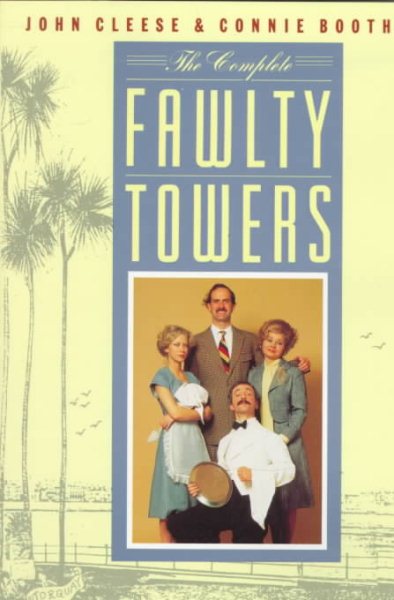 Features the complete scripts, with photographs, of the popular comedy series set in the hellish hotel known as Fawlty Towers, where the disgruntled Basil and Sybil reign and there is always room for more insanity Read More
The complete and unexpurgated scripts of one of the most celebrated comedy series ever. Published in its entirety for the first time and illustrated with a host of hilarious photographs, The Complete Fawlty Towers will appeal to the millions of fans who have suffered through endless PBS fundraisers waiting for the next episode -- and anyone who has survived a package holiday tour.Fawlty Towers is the hotel of every traveler's nightmare. Basil Fawlty -- ill-tempered, henpecked, and conniving -- tries in vain to be master of his house under the disapproving and ever-watchful eye of his wife, Sybil. The hotel offers service by Manuel, the incompetent Spanish waiter whose feeble grasp of English makes for hilarious misunderstandings, and Polly, the unflappable chambermaid who is Fawlty Towers' only sane employee. Meals are scorched in the kitchen while adulterers consort upstairs and chaos reigns all around. For countless fans, Fawlty Towers is the best-loved bad hotel in the world, and with publication of The Complete Fawlty Towers they will all have a chance to relive its outrageous awfulness. Read Less