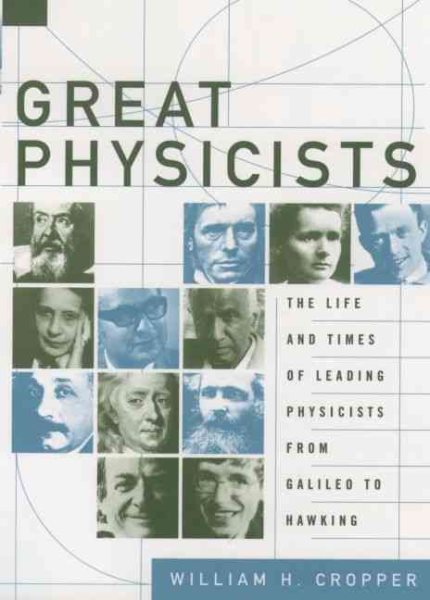 Presents profiles of thirty scientists, including Isaac Newton, Michael Faraday, Albert Einstein, Marie Curie, Richard Feynman, and Edwin Hubble. Read More
Here is a lively history of modern physics, as seen through the lives of thirty men and women from the pantheon of physics. William H. Cropper vividly portrays the life and accomplishments of such giants as Galileo and Isaac Newton, Marie Curie and Ernest Rutherford, Albert Einstein and Niels Bohr, right up to contemporary figures such as Richard Feynman, Murray Gell-Mann, and Stephen Hawking. We meet scientists--all geniuses--who could be gregarious, aloof, unpretentious, friendly, dogged, imperious, generous to colleagues or contentious rivals. As Cropper captures their personalities, he also offers vivid portraits of their great moments of discovery, their bitter feuds, their relations with family and friends, their religious beliefs and education. In addition, Cropper has grouped these biographies by discipline--mechanics, thermodynamics, particle physics, and others--each section beginning with a historical overview. Thus in the section on quantum mechanics, readers can see how the work of Max Planck influenced Niels Bohr, and how Bohr in turn influenced Werner Heisenberg.Our understanding of the physical world has increased dramatically in the last four centuries. With Great Physicists, readers can retrace the footsteps of the men and women who led the way. Read Less

Goodreads reviews for Great Physicists: The Life and Times of Leading Physicists from Galileo to Hawking