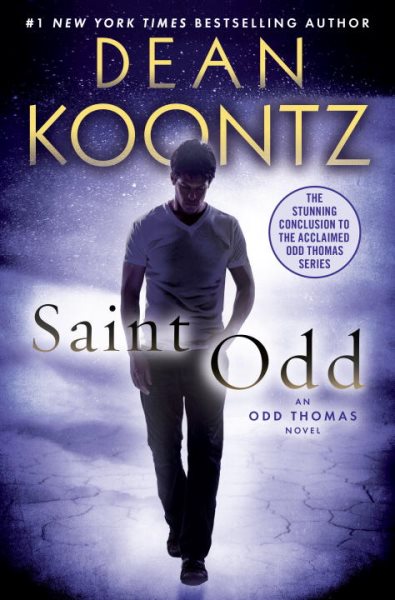 Returning to Pico Mundo, California, Odd Thomas faces the memory of his lost love and one last challenge as he prepares to confront an evil force. Read More
NEW YORK TIMES BESTSELLERFrom “one of the master storytellers of this or any age” (The Tampa Tribune) comes the stunning final adventure of “one of the most remarkable and appealing characters in current fiction”(The Virginian-Pilot)—as Dean Koontz brings the unforgettable odyssey of Odd Thomas to its dazzling conclusion.Odd Thomas is back where it all started . . . because the time has come to finish it. Since he left his simple life in the small town of Pico Mundo, California, his journey has taken him to places strange and wonderful, mysterious and terrifying. Across the land, in the company of mortals and spirits alike, he has known kindness and cruelty, felt love and loss, saved lives and taken them—as he’s borne witness to humanity’s greatest good and darkest evil. Again and again, he has gone where he must and done what he had to do—for better or worse—with his courage and devotion sorely tested, and his soul forever changed. Every triumph has been hard won. Each sacrifice has taken its toll.Now, whatever destiny drives him has finally steered his steps home, where those he cares for most surround him, the memory of his tragically lost true love haunts him, and one last challenge—vast and dreadful—awaits him. For Odd Thomas, born to serve a purpose far greater than himself, the wandering is done. Only the reckoning remains.Praise for Saint Odd “Equal parts supernatural thriller, cultural satire, character study, bildungsroman, offbeat love story, road trip, spiritual meditation, and apocalyptic adventure, the Odd Thomas books . . . are more than irresistible page-turners. They are intimate, haunting, often heartrending, exhilarating, and beautifully composed.”—Biography.com“Odd Thomas is such an endearing and likable character and, more than anything else, has been the reason for the success of the series. . . . For readers who have been with Odd all along,Saint Odd will satisfy.”—BookreporterAcclaim for Dean Koontz and his Odd Thomas novels“Odd’s strange gifts, coupled with his intelligence and self-effacing humor, make him one of the most quietly authoritative characters in recent popular fiction.”—Publishers Weekly“Koontz gives his character wit, good humor, a familiarity with the dark side of humanity—and moral outrage.”—USA Today“The ultimate Everyman . . . an avatar of hope and honor and courage for all of us—the linchpin of a rollicking good tale . . . Odd evokes the homespun wisdom of Forrest Gump amid the mind-spinning adventures of a Jack Bauer.”—BookPage“There’s never anything predictable about an Odd Thomas adventure.”—Booklist“The nice young fry cook with the occult powers is [Koontz’s] most likable creation . . . candid, upright, amusing and sometimes withering.”—The New York Times“An inventive . . . mix of suspense, whimsy and uplift.”—The Washington Post“Heartfelt and provocative . . . a wonderfully rich and entertaining story.”—Chicago Sun-Times Read Less

Your Heart Belongs to Me