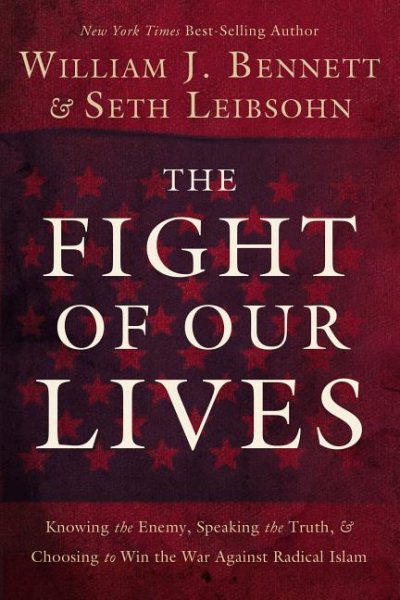 Argues that the concern for political correctness has weakened the resolve of American political leaders to defeat the radical Islamic terrorists who continue to espouse an agenda harmful to the United States. Read More
Refocus on the fight.Ten years ago, when radical Islamist terrorists used three U.S. airplanes to kill nearly three thousand of our countrymen, America was angry. It was a focused and justified anger—one that generated clear objectives and a willingness to meet them. But that resolve has deteriorated so much that many of our nation’s top political and military leaders will scarcely utter the word that brought us here, “terrorism,” let alone the ideology that fuels it, “radical Islam.”In The Fight of Our Lives, William J. Bennett and Seth Leibsohn examine the devolution of America’s post-9/11 tenacity and how this country’s well-meaning culture of religious tolerance, coupled with soft and apologetic political leadership, has placed us squarely in the pocket of radical Islamists who have made clear their intention to obliterate everything we value.America’s devotion to political correctness has crippled its ability to accurately interpret and respond to the motives of its fiercest enemies. Unless we change course and re-engage the fight, the costs of our tolerance will prove tragic and immeasurable.The Fight of Our Lives helps readers refocus, to reframe and understand the threats we face.By surveying and explaining the current scene, Bennett and Leibsohn point the way to a future in which our enemies are properly acknowledged and firmly opposed.“Crucial,” “Timely,” “Brave”—Advanced Praise for The Fight of Our Lives“An important book. Many have forgotten the mortal threat to America that is radical Islam. Bennett and Leibsohn explain why we must wake up and what we need to do.” ?Mark Levin, nationally syndicated radio talk-show host and author ofLiberty and Tyranny “This bold and readable book makes a powerful, if controversial, case against appeasing terrorists and those who support them—and in favor of a strong cultural commitment to defeat an enemy bent on our destruction. You may disagree, as I do, with some of its points, but you ignore its central conclusions at your, and our, peril.” ?Alan Dershowitz, Felix Frankfurter Professor of Law, Harvard University, and author ofTrials Of Zion“Bill Bennett has been a brilliant sentry in our nation’s cultural life. In this luminous and spirited book, he and co-author Seth Leibsohn sound the alarm on behalf of us all. America can prevail in its struggle against radical Islamism, and they show us exactly how. A book for this moment, written with poise and passion, and suffused with love of country.” ?Fouad Ajami, Johns Hopkins University professor and a senior fellow at the Hoover Institution“Bennett and Leibsohn follow Admiral Nelson’s strategy?“Go right at ’em”?right at both our deadly enemy, radical Islam, and its apologists, and especially right at our own politically correct, self-neutered establishment. A wise, timely, and brave book.” ?R. James Woolsey, former director of Central Intelligence and head of the U.S. Central Intelligence Agency“We are living, as Bennett and Leibsohn say, in ‘the Gelded Age,’ but we won't be living there for long because the forces of radical Islam have not paused in their drive to defeat the West.The Fight of Our Lives rouses the sleepy and the weary. It’s the crucial book of the year.” ?Hugh Hewitt, nationally syndicated radio talk-show host and author ofThe War Against the West Read Less

Goodreads reviews for The Fight of Our Lives: Knowing the Enemy, Speaking the Truth, & Choosing to Win the War Against Radical Islam