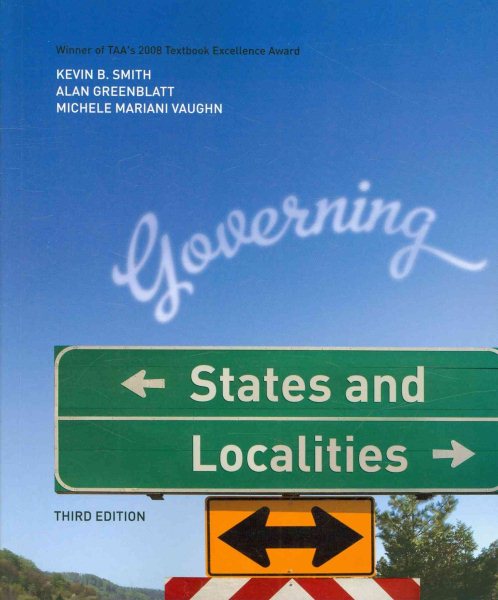 Smith (political science, U. of Nebraska-Lincoln), political journalist Greenblatt, and Vaughn (a project manager for the Pew Center on the States) present the third edition of their textbook introducing undergraduates to state and local government in the United States. The text emphasizes accessibility with its "news-writing" style and heavy use of graphics and tables. It covers the standard topics expected and, for this new edition, includes a new chapter on environmental policy. The text has been updated in light of current developments, including results of recent legislative and gubernatorial elections, recent Supreme Court decisions, key changes in campaign and election regulations, and other recent events and issues, with the chapter on government finances undergoing the most thorough revision because of the enormous changes wrought in that area by the current "Great Recession" (a related "States under Stress" theme has also been added to the presentation of illustrative feature boxes). Annotation ©2010 Book News, Inc., Portland, OR (booknews.com) Read More
Despite reports of the recession nearing an end, states will have to struggle to make ends meet well into the foreseeable future. The choices are sometimes stark: trade-offs between roads and schools, public safety and health care. The new edition of Governing States and Localities responds to this reality with a new, sharper focus on economic and budget pressures. The chapter on finances comes earlier in the book, helping to frame each of the subsequent issues, and a new feature called “States under Stress” helps students see how fiscal and budgetary policy affects all areas of state and local governance. A brand-new chapter on the environment highlights the leadership role the states have taken in fighting climate change, creating green jobs, and combating pollution. Still a great blend of engaging journalistic writing, high-quality academic analysis, and the latest scholarship, the third edition has been thoroughly updated to account for such major developments as the recentralization of federalism under the Obama administration and the further politicization and rising costs of judicial elections. The authors have expanded coverage of referendums and direct democracy, as well as the increased role states play in homeland security. A series of well-designed features asks students to apply the comparative method (“A Difference that Makes a Difference”), to see how intergovernmental relations impact localities (“Local Focus”), and to see examples of how policies are actually implemented (“Policy in Practice”). An engaging full-color design, more than thirty maps, a vivid selection of photographs, updated tables and figures, and a marginal glossary all combine to keep your students focused and learning. Read Less